October 2015: Dust: An Elysian Tail is now available on iOS!

In a perfect world, I would just tell you to go buy and play Humble Hearts' indie action adventure Dust: An Elysian Tail, also for iOS, Playstation 4, and XBbox360, and you would so I could get back to playing it myself. In this visually stunning and captivating Metroidvania-esque platforming RPG, originally an XBLA exclusive, you control Dust, a mysterious warrior who awakens deep in the forest with no memory of who he is. Fortunately for him, the mysterious talking sword known as the Blade of Ahrah has awakened and been drawn to him... even if he has no idea why. Together with the sword's unlikely guardian, the excitable flying Fidget, Dust sets out on an epic journey of self-discovery, never suspecting that his true destiny might be bigger than anyone ever imagined. Enormously impressive and stylish with a loveable cast, exciting combat, and a beautiful world to explore, Dust: An Elysian Tail is a game that deserves your attention immediately. 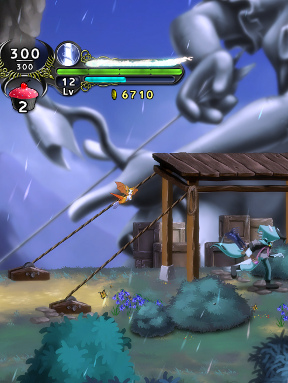 Fully playable with either a controller, the keyboard alone, or a keyboard/mouse combo, Dust plays like a side-scrolling action RPG. You'll explore a world teeming with danger, magic, and secrets in your search for the answers to Dust's past. In order to survive, you'll need to master the elegant yet deadly and fast-paced combat that lies in the game's core. Dust is a swift and acrobatic fighter, and mashing buttons will only get you so far. You'll unlock a variety of special abilities and attacks you can utilize through certain key presses to fight more strategtically against your foes. Even tiny, sassy Fidget plays a part, as you can combine your attacks with her magic to unleash devastating damage on your enemies... if you're quick and clever enough. Chain together multiple attacks without taking damage to build up your combo, earning more bonus experience towards leveling up and growing even stronger. When Dust goes up a level, he earns skill gems that can be spent on upgrading his strengths as you see fit.

You'll definitely want to explore each area instead of tearing straight to your objective since there are secrets everywhere. Walls can be broken to find, uh, chicken but also passages that may contain treasure chests or the keys to open them. Crafting materials can be discovered to be used with blueprints to make powerful new items. Bomb fruit can be manipulated with wind powers to blow open stubborn barricades or take down enemies. Each area is huge, however, and a lot of secrets and areas won't be able to be uncovered until you have certain items or skills. If you want 100% completion... get ready for a long haul. 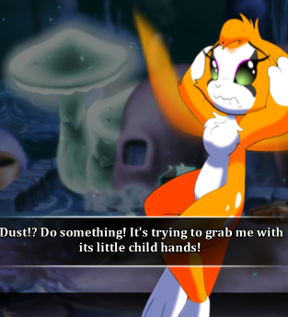 Analysis: Dust: An Elysian Tail is one of those rare games that is as fun to play as it is beautiful to behold. Character animations are fluid, and their designs are colourful and packed with personality. The environments can be the real jaw-droppers though, with weather that changes as you explore and tons of detail to just soak in. The whole "amnesiac hero" thing has been done to death in games before, but it's at least presented here with style in a unique world whose history and characters you want to know more about. Dust's pleasant stoicism means he never really gets to exert much of a personality beyond being a hero, sadly, but Fidget shines. Some may find her constant chatter and jokes annoying, but she brings a much needed lightness to the otherwise drama-heavy plot. Even the relatively unimportant NPCs manage to have a lot of charm, aided in part by largely excellent voice acting.

While exploring the huge maps is a lot of fun, however, trekking back and forth over them when you're looking for something and going somewhere specific can be a bit of a pain. Since enemies respawn, the combat can lose some of its shine when you're slogging through literal dozens of the same type of enemy you just defeated when all you want is to get back to an area to use a new skill or item to reach something you couldn't previously. This is compounded by the fact that the map isn't particularly useful, showing you what side of each area exits are on, but little to no other details. It makes tracking down a specific spot frustrating in the more expansive areas... but nowhere near as frustrating as those bomb fruit puzzles. Can we just agree anything involving bomb fruit is the worst? Navigating the explosive fruits around hazards takes practice and a bit of luck, and when a timer comes into play, it makes babying them around big areas to get them where you need them as part of a puzzle tedious. Fortunately, Dust is a far better action/adventure RPG than it is a puzzle platformer. 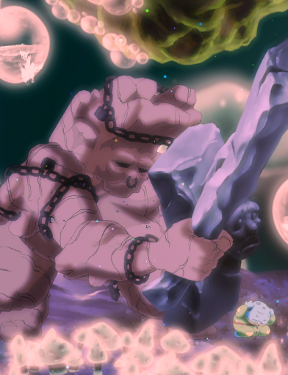 Dust's combat is a lot of fun and requires a lot more finesse than Fidget's early suggestion to mash buttons. It's important to practice your combinations and techniques against early foes as much as it is to grind levels, since many of the bosses you'll encounter are far stronger than you and require strategy to beat. Heck, even some standard enemies will thrash you if you don't master your attacks and parrying. While it feels like the difficulty level can be somewhat erratic, with some bosses requiring drastically less finesse than others, combat never stops being fast and engaging. As Fidget gains new spells, you can swap between them for whatever works best and fits your playing style. Together, you can chain together massive combos and execute complex aerial attacks that leave you a little giddy inside whenever you pull one off.

Though Dust's story may feel like a familiar one, it paints a vivid world that embraces its characters with a sense of genuine heart and warmth. It's a long game for its kind, with hefty chapters that will take you all over the world and have you meet a variety of characters with their own problems... and not all of them end well. Don't let the unexpected hilarity of floating chompy cave monsters and Fidget's self portrait lead you into thinking this is a pointlessly fluffy game. It deals with some dark themes, some heartache, and some definite drama when you least expect it, and combined with the game's stunning visuals and overall sweeping cinematic presentation, it makes for an unforgettable experience. If you're looking for a gorgeous adventure filled with memorable characters and more action than you can shake a hittin' stick at, Dust: An Elysian Tail, will provide in spades.

I have been playing this game for a little now and i am about half way through and find it remarkable. It gives me memories of Lunar: Silver Star Story meets Castlevania. One thing that is not mentioned in the review is that this was made by one man who did both the programming and art of the game.

I finished this game about a month ago; before getting my 360 controller for it (On Steam, PC). It was worth an excessive greatness. Far more than any expectation I could or any other gamer, h'd ever imagined. I believe this to be one of many games that use the spirit of purely classic and plot ingeniousness, immaculate in conception and perfect in design; contrived, schemed, and conceived of a tale unlike any other; 'Sublime' yet radically awe-invoking. I love and hold this game closest to my heart. (I've played v games for over 10 years, as Rogue Galaxy, Donkey Kong Country, Kingdom Hearts, Dark Cloud, and Kirby's Dream Land 3)

Dust is the coolest, most enigmatic and "Righteousness Incarnate" video game character to receive enormous yet intense admiration.
If you like 'Metroidvania' 2D transcendent to a point of overwhelming sensation, excellently out-of-this world inspirational, guided by Dean Dodrill, an original lone-animator and lone/single game-designer, 'Gloried' of treasured video games, there is not a single detail that can capture this game's Majesty. This is for any game-lover, YOU (Hands-Down). Don't miss out on a legendary Light of the greatest most Mysterious and most ultimately "Super-dynamic" games to be available in this country and possibly - the entire world-market. (Released on XBLA, too) What things I love, the high-octave - a final magnanimous brilliance non-concurrent with a grandiosity that is unlike any of the great creations God has envisioned (with video games) ever to meet the magnificent culture of this hobby... and art. Please, if you are a person of life, download this really unmatched rare jewel; only those who hate games or are out of its generation can ever relent in baneful display: to disliking it. I have dedicated conviction this series of Indie cult 'Light' classics will bring about revelation and true Love to the gaming community, and all video game developers. Sen-Mithrarin, born of the Dust, is the culmination of gameplay-meets-plot marriage monumentally seen on the face; or Falana (Dust's Setting), of this world we call home. 'Tis a Load of righteousness in a battle greatness itself can not envision. Vivid graphics, strategic combat, lighter adventure than Donkey Kong, and contentedly satisfying to all eyes, the like of Cosmic gaming revolution, this outshines the rest, mundaenity transfigured into darkness. Imitating Christianity, this is a game make-up of stars, and Utopian stature! If you so wish, bring forth an adventure beyond this planet, far into the above heavens; Dust: An Elysian Tail.

I'm not sure if I'm being tricked by the way the updating went, but if JIG never even covered this game until it came out on mobile devices I can't help but feel a bit disappointed in them for passing it over back when it first came out on computers.

Suffice to say, it's pretty much the best metroidvania in existence right now that isn't licensed by Nintendo or Konami. (I have to say "right now" in light of the upcoming Bloodstained: Ritual of the Night, we'll see about that one). The gameplay has a real sense of flow and action to it that I've only ever seen approached by the good Devil May Cry games (1, 3, 4), where just playing the game well automatically creates a visually stunning action scene out of every fight.