In this fantastically retro explorer platform game created in PICO-8, you play as our pink haired hero who was drawn to this strange cavern filled with spikes and mystery. Sophie Houlden's Dusk Child is a short adventure game where you find alluring orbs, holey buckets, and strange statues that either have a puzzle to be solved or are trying to kill you. One thing's for sure you're in for a pixelated treat as Sophie brought us Linear RPG, BOXGAME, Sarah's Run and a few others we all loved. While Dusk Child isn't as polished as some of the other titles it's still one to be enjoyed. Just be careful, because while there are save points for when you die there isn't any save for when you close out of the game. However, this game isn't that long and can be finished in one sitting. It also does some things differently than other platformer games, one being that you don't have to worry about the ceiling when you jump as your head goes right through it, so no unexpected sharp descents to your frustrating death. And while spikes are deadly when falling from above, you can easily walk through them without giving up the ghost. With some other great and clever devices, Dusk Child is sure to have its place among Houlden's wonderful games. 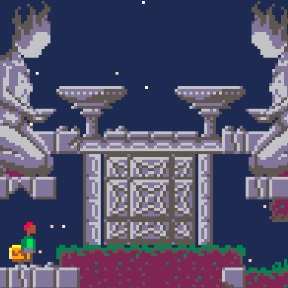 Dusk Child is played with the [arrow] keys, including the up and down [arrows] for jumping and crouching/crawling, respectively. [Z] is the main action button which is used for picking up and dropping items, as well as inspecting signs and objects, and in doing so you'll sure to notice a flaw this game has. You have to be situated just right on an item for the hot spot to work. Now, "just right on it" usually means standing mostly on top of it, but if you're like me you're trying to squeeze by when at least some part of your pixels is covering the object. With the signs it's not that big of a deal as you move over a smidge and can then read it, but it becomes a sizable deal when you're trying to jump on top of blocks... if your foot hits the bare edge instead of landing firmly on it, you're falling through. For most of the game, this just keeps you from being lazy, but the last section is going to really test all you've got. The difficulty curve really jumps straight up with the final area, but with some clever thinking and swift fingers it's a test you'll cheer after conquering. Even with this small hiccup Dusk Child is an innovative platformer you'll be tickled pink to play.

Unless there is something to pick or messages to scroll, hitting Z jumps the page further down. With up and down arrows, when the task they should perform meets an obstacle or is not possible, the page scrolls up or down.

Previous comment is for Firefox 40. I tried it with Chrome and Opera and it works with no scrolls and jumps.

Why, WHY, WHYYYYYYY did you make his feet just the TIIIIIIIIIniest bit slippery?!?!?!?!?

No, seriously, why? It transforms an already difficult but enjoyable game into a frustratingly not fun experience.

What a fantastic game!
I thought the difficulty level was about perfect. The spike area on the right was a little frustrating but not remotely twitchy. Only improvement would be if it was longer :)

Not only slippery feet but floaty jumping. It seems like these dreamy, pixel-retro games usually come packaged with those flaws. I like the aesthetic, but the gameplay is frustrating.

Fun game, I didn't find the jumping a problem at all. My only complaint was the length :P I wanted more special powers.

In case anyone else is an idiot, like me you need to

to get the door to open, not just restore the keystones.

fun game! I loved it! Intriguing ending, as well.

Call me an idiot then. It definitely wasn't clear to me.

I can't figure out how to get past

the first patch of fire

the bucket, and I placed a keystone so that there's water flowing into one of the statue dishes.

Hmm... carrying water bucket seems not helping in getting pass the fire. What did I miss?

The floaty jumps and slippery feet weren't too bad at first, and I got through most of the game in 15 minutes. At the East section though, my framerate inexplicably plummeted and it took an hour to finish. No clue what happened.

If you've placed the keystone, you've opened the western temple. In the temple, there's a room with a statue in it. It's not a dead end. You can crawl beneath it.

What a surprise this game was. I love how it feels like an adventure with a layer of platforming mechanic. Pretty cool.

Slippery feet ruined the game. It's like an unnecessary way to make the game longer.

Oh wow, I guess I needed to go check like the one screen I didn't check after I placed that keystone. OK, thanks!

Super short platformer with no story behind it. Big disappointment.

Funny enough I just recently reinstalled my CPC-Emulator for the good old feeling, so its nice to see a javascript game that really reminds me of the 1980s.

Enjoyed the game until the spike screens in the right. That was very frustrating given the very sleepery controls.

I've got to say I think Sophie Houlden rocks. I've loved her since Linear RPG. Really interesting and very playable games and this is no exception

Yeah, me, too! Just the hint I needed.