Dungeon Plunder is one of those mobile games whose name says it all. Created by Dominic Duchesne, this randomly generated roguelike ditches most of the story and gives you precisely what you want in an RPG: looting, equipment, stuff to fight, and experience to gain. The best part is that combat is handled not with a menu system but with a good old fashioned slot machine! 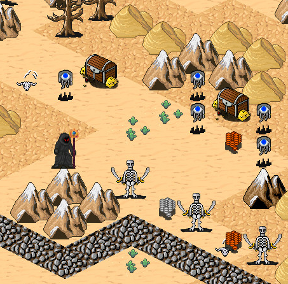 An evil wizard is slowly freezing the world using the power of a magical orb. You're out to put a stop to that, but there's a whole lot of opposition standing in your way. Dungeon Plunder randomizes the world each time you start, so even though the basic premise is the same, the quests and enemies will always be different. Start out by choosing one of three classes: wizard, warrior, or rogue. Each one requires a slightly different strategy when it comes to combat, such as the wizard using potions to increase mana or the warrior buffing up his defenses with ease. They're all fairly well balanced, so it just comes down to a matter of preference.

Once you have a character, let the roguelike-ing begin! Move around the isometric world one space at a time by tapping on your device's screen. Shops, dungeon entrances, missions, chests and enemies populate the overworld, and all you have to do to interact with them is to walk right up and say hi. Inventory is automatically handled but can still be accessed from an on-screen button, and things like artifacts and relics will also be uncovered during the course of play. 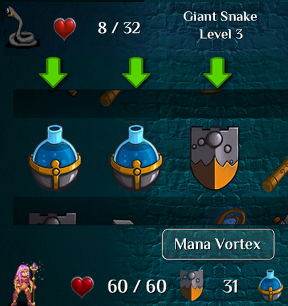 Combat is where you'll have the most fun, and it's amazing how much depth you can create using a simple five window slot machine. Tap the spin button to start the tumblers tumbling. They stop on one of several icons, each representing a different action your character will take. Tap on the windows to lock an icon in place, then spin again to randomize the remaining windows. The goal is to get as many matches as you can, thus increasing the damage you deal, the health you recover, the special ability you charge, etc. Your opponent deals damage each turn, so keep your defenses high and play a smart game of slots so you can come out on top. If you die, you lose the character (and your progress) forever!

Analysis: With its old school graphics and traditional roguelike gameplay, Dungeon Plunder certainly looks like it's out to capture some nostalgic players. As soon as you try out the slot machine combat, though, you realize it's just as friendly to the modern casual player as it is anyone else. It's very easy to pick up and start adventuring, as the only real obstacle is remembering what each of the slot machine icons do when matched. But hey, that's what checking the help menu three times in a row is for!

Perhaps the only downside to Dungeon Plunder is its insistence upon sticking to the permadeath feature usually found in roguelikes. This can really hurt your momentum if you make a misstep late in the game and have to start over from the beginning. It would be nice to have a more traditional campaign of progression as an option alongside permadeath mode for additional replayability.

If you don't mind being a bit careful, Dungeon Plunder is an amazingly addictive role playing experience. It's got just enough loot gathering and equipment hunting to keep you searching for more, and the slot machine battle system never gets old!

Thanks for writing about the game! Very thorough article, it shows you've taken the time to play it. Kudos.

Not much to add really. Just wanted to mention something about the progression on death: You can actually unlock an higher starting level if you die at level 5+.

Basically the game will allow you to start all your future characters of that class at your death's level minus 3 so if you die on level 8 as a mage you can start all future mages at level 5 in your upcoming games.

You'll also always leave an inheritance of gold, magic items, runes etc. to your next character whose size depends on your death's level. It's still a step back but it should help you to get closer to the end goal even on death vs starting back from scratch.