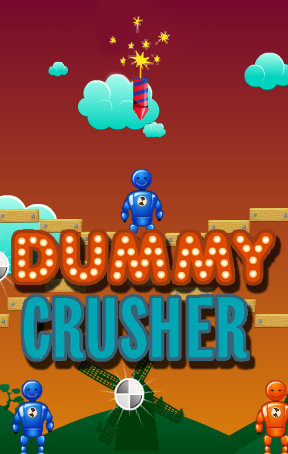 Who knew that crash test dummies were so...squishy? In Dummy Crusher, a sadistic little physics game from Alexandr Porubov and Ekaterina Saburova, you're a contestant on a Hunger Games-like TV program where you're given all the explosives and projectiles you could ever ask for and have to make the audience happy by knocking the stuffing out of poor, defenseless crash test dummies. Like all good physics games, the controls are simple. Just left-click anywhere on the screen to drop tires, firecrackers, remote controlled bombs, and even safes flying down on the always smiling dummies. The aim of the game is to cause the most destruction possible and to max out your points bar before moving forward. Take your time and be creative, or the audience won't be happy and you'll need to start again. You can also skip ahead to the next level if you don't feel like going on. Another cool feature are launchers, which you can place to send objects hurtling in any direction you like.

The different setups are not that original, and sometimes it's a bit counter-intuitive trying to understand how to get your bombs past the odd platform setups, But, really, the game isn't about skill, and the whole point is just to go nuts crushing test dummies. Don't be surprised if you find yourself playing the same level more than once just to see if you can max out the carnage. There's also a running point total as you play, of course, but most players will be having too much fun to even notice it. Dummy Crusher is not game-of-the-year material by any means, but at 20 levels, there's plenty here to fill up a long lunch break.