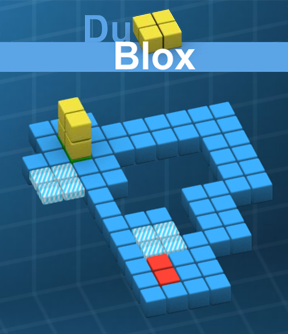 It is said that you can't put a square inside a circle. As it turns out, putting a square over a square isn't that simple either. In this polished take on a long-lived puzzle classic, Hooda Math's DuBlox is a challenging game where you have to get your blocks at the right spot.

Playing DuBlox drew a mix of two kinds of sensations, somewhere between parallel parking and solving a Rubik's Cube. Both, incidentally, are also terrible examples, because both are the kind of activities that makes people cringe and rather do something else. DuBlox, on the other hand, is the type of game you can play and play and play, no doubt helped by that magic ingredient that makes you keep coming back. You move a grid of blocks along a platform, made from more blocks, by flipping it over, much like 'rolling' a box full of presumably unbreakable stuff (so, no "This Side Up" marking). The aim is to rest your block on the two red blocks designating the end. (Similar to Bloxorz.) To do this you must maneuver your blocks around the space, avoiding the edges or triggering disappearing blocks (there are also teleport and bridge blocks that ought to be activated).

The soothing soundtrack and smooth presentation just makes it all that much better. DuBlox even does the one thing that this reviewer sees as a must in any puzzle game: once you complete a level, the game automatically loads the next challenge, so there is no interruption of the process by having to grab a mouse and click on some annoying button marked "next". Scoring is determined by the number of moves you make to complete a puzzle, while different grades of medals are awarded for your frugality.

There are forty-nine stages to complete as well as a neat level editor to facilitate your own creations. If anything, having Dublox in your browser is a bit of a mercy. If this was on your phone, you'd have no life yet. What am I saying? It'll probably be on your iPhone or Android soon, if it's not there already.

i know this music ! its from Charger Escape by Pastel games i love it :D

Sounds like Pastel games draws from the same music pool as us.

Really good! :) The kind of game that makes me wishing for more.

The soundtrack is fine and all, but I really feel like a parody of "Du hast" would be more fitting.

Seems like a huge rip off of Bloxorz to me. (Reminds me of Vanilla Ice trying to convince the world that the riff from Ice Ice Baby was COMPLETELY different than Under Pressure.)