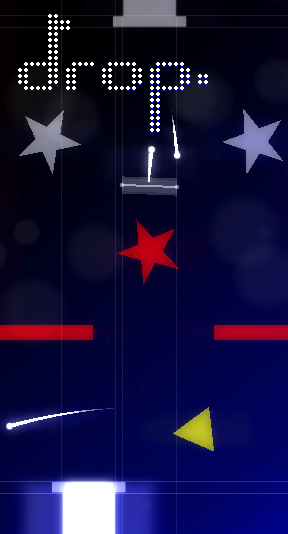 I like games that use the Unity engine, and I like musical games that are also random soundtrack generators, but I usually don't like physics puzzlers. So I suppose that Drop, a musical physics puzzler in Unity from Quick Fingers, gets two out of three! Actually, Drop is a great example of how an often mediocre genre can be original and fun with just the right presentation. Drop doesn't have an elaborate backstory or hamfisted theme, but instead relies on cool, clean visuals and some clever sound design for a game that's often quite fun to play.

Sandbox mode gives you a free screen to draw on and play with, while the actual gameplay is found in Puzzle mode. The goal of Drop's Puzzle mode is to fill all the end pipes with bouncy white projectiles. These projectiles appear from one or more other pipes throughout the level, and you can maneuver projectiles around obstacles and to their goal by drawing lines across the screen, off of which they will readily ricochet. Draw a line by clicking and dragging with the left mouse button, and delete it by clicking on it with the right button. Certain colors indicate that obstacles will behave in certain ways; white acts pretty much like a line you draw, red destroys projectiles, blue is super-elastic, etc. You can only draw a certain number of lines each level, so the challenge is in shuttling the projectiles around obstacles as efficiently as you can.

While many Unity games make use of its 3D capabilities, Drop doesn't have a 3D appearance, and instead uses Unity to manage the game's physics. The look that results is simple, colorful, and "computer-y" in a Tron sort of way that looks great. The sound design is perhaps Drop's most unique feature: Every time a projectile bounces off a non-red surface, it plays a random pitch that fits a given key. In Sandbox mode, you can create elaborate physical soundtrack machines in this way, and for levels with many lines and obstacles, the result is a bloopy, carnival soundtrack that makes even the most tricky levels fun to listen to. Levels in Drop range from fairly easy to pretty challenging, and the hardest levels require a great deal of finesse and attention. Thankfully due to a recent update to the game, you can now move and edit endpoints thus making fine tuning of your designs a breeze.

Please note that other solutions may be possible for a particular level.
A1-A2

Drop was beautiful and had fantastic sound.

The only fault is that its not my type of game. It's not a game fault, its just a personal dislike. I dont like games where you're doing trial and error a lot, and I'm finding even level "3" hard. But the game has amazing potential.

I found something quite weird, if you manage to get your little balls to hit exactly in the corner, they go inside of the blocks.

Loved it, finally finished puzzle mode after much trial and error on some levels, but the challenge was perfect for me.

So, I managed to by accident make the balls go inside of blocks, but then, by accident did it on the next few levels as well. Here are some screenshots and an explanation.

I noticed that the balls would go into the corners. After playing around with it a bit, I went on to the next level. On this level too, I managed to get the balls into the block, but they would simply wall down off the screen. so I positioned a line so that it went through the block, and the balls bounced into the horizontal section. this is when I discovered that the balls would not fall off of the horizontal section, and would stop at the corner, as if there was some kind of invisible wall. I was confused, but moved on. In the next level, the balls were easily deflected into a triangle, but would then bounce back out. so I then added another line to bounce the balls to a different triangle, and they stayed in this one. Then, to my amazement, the balls would start falling out of the bottom corner, and directly on to a red triangle. It seemed that not only could the blocks enter at corners, they could exit them too. In the next level, the introduction of the blue blocks, I could see no blocks to put the balls into. So I attempted to deflect the balls onto the blue block and directly into the pipe, when I discovered that it wasn't just blocks it went into. The balls were entering the pipe, and bouncing around inside. However, they would simply bounce directly off screen, and so I placed a line through the pipe, hoping that the balls would bounce around the small space. But then, the balls bounced backward to the pipe entrance from the inside. The balls then disappeared, filling up the pipe from within the pipe! I was so amazed, at that point, that I decided to post this here along with screenshots.

Please note that other solutions may be possible for a particular level.
A1-A2

Lovely game. It might have been nice to be able to grab an endpoint with a mouse, and then tweak it pixel by pixel using the keyboard.

My 4-year-old noticed that the following strategy worked on at least 5 of the levels:

Use 3 lines to make a |_| cup for the white balls. Wait until the cup fills. Then erase the bottom edge, to dump a big spray of balls on one or more exit pipes.

I doubt that it was supposed to be that easy. Perhaps

one shouldn't be able to drop more than one ball into a pipe at a time.