Created by Markus "Notch" Persson (the mind behind a certain popular crafting game featuring mines) in just 48 hours for Ludum Dare's minimalism theme, Drop is a simple experimental typing game with a trippy visual twist. To play, you just type the advancing letters before they reach the edge of the screen, pressing [spacebar] or [enter] to submit typed letters for points. All while the fabric of reality bends and warps around you. 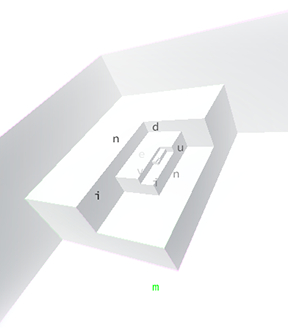 Spiraling down into the infinite alphabet abyss is actually a lot more fun than it sounds. The mechanics behind Drop are nothing particularly new but its simplicity and visual intrigue make it worth a couple of tries. Of course, there's probably some deeper meaning behind it all, as you spell words like "lucid," "eternal," "mind" and "deconstruct." And each time you fail you're greeted with flashing red letters spelling things like "angry," "afraid" or "bitter." What's the deep psychology underneath it all? Who knows. But hey! It's a fun typing game.

I enjoy this, but I wish it had more variety. I'm a crazy fast typist (think something like 75 words per minute), so I got pretty far. I thought I'd get to a lot of new words as I kept going, but not really. If you're not a great typist, you won't get far at all. Interesting idea, though.

I think it requires way too fast a typing speed. I type faster than most people I know, and I found it frustrating rather than fun.