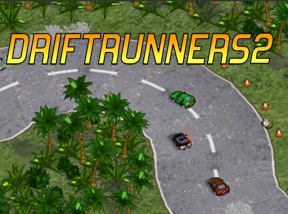 Have you ever watched The Fast and the Furious? Do you own an Initial D card? Have you considered drifting into your parking lot? If you answered 'yes' to any one or all of these questions, then Drift Runners 2 is for you.

Made by Long Animals, Drift Runners 2 is a surprisingly deep racing game. Use the [arrow] or [WASD] keys to steer and accelerate, and [X] or the [spacebar] to activate your turbo when applicable. It's played from the top-down perspective, the better to see the track ahead and control your drifts to get lined up for the next one. You'll spend the majority of your time skidding around corners: the first track even has an achievement for drifting through an entire lap without hitting the walls. Drifts gain you points and speed boost energy. The more drifts you chain together, the higher your score multiplier. Score and achievements get you new cars, upgrades, and track unlocks.

The controls are satisfying, and it's easy to put your car into a skid to beat your competitors around the corner. The early tracks are simple enough, but soon you'll find yourself having to rely on skill and timing your boosts perfectly to beat out your fellow drifters. The difficulty ramps up quickly; admittedly, I'm pretty bad at racing games, but I found myself having a hard time making that crucial switch from 4th to 3rd place. Part of it is the downside of the drift-ready controls. It's actually sometimes too easy to end up in a drift, and often I'd find myself skidding into the wall before I had time to realize that I was in last place. You'll likely find yourself restarting tracks a lot, trying to get a higher ranking or that essential last achievement.

On the upside, the game saves your progress from session to session, so you can revisit your drifting career again and again. It'll take a long time, even once you've perfecting your drifting skills: there are 25 tracks, each with at least one achievement to work towards and a corresponding bonus level, for 50 in total. There are 10 cars to choose from, as well, with four levels of upgrades for each one. Needless to say, here's a lot of depth to this game. You can even use your own MP3s for the soundtrack if you get tired of the upbeat racing themes.

Overall, Drift Runners 2 is a fun, fast-paced drifting simulator that knows what it has to do and does it well. There's enough customization and variety within this game that it'll keep you working on it for a while, and the gameplay is different enough that it'll appeal to gear heads and casual gamers alike.

Wow, not a single comment yet? "Action" games are not very popular on JIG, and this is a moderately fun one, although unremarkable. I played through and got all achievements in a couple of hours. The secret is

Pursue the stupid and easy achievements to get upgraded cars. Then the racing is much easier!

Yes, I'm surprised, too. This was pretty fun a game. The only things I missed were a display of my racing position and rockets, of course. Everyone's gotta love cars with rockets.

Being a casual racing enthusiast, I finished it in three sessions.
Drift physics were nice to learn and moderately intuitive, but not very realistic. Come on - more acceleration in a curve than in a straight line?
Choosing an adequate car for the track really made a difference, so it makes sense of upgrading them all. Missions were quite fun (especially chasing the UFO) and quite challenging too (drifting for an entire lap).

The bird's perspective (and scenery) revealed a memory of Micro Machines. Sadly, the unlockable extras felt like the developer ran out of ideas. I really had hoped of abducting some cows myself sometime.

Hey, does anyone have any tips for the two "score 10,000" achievements? I have almost every other one but I can never get more than around 1500. Is there a car that's better than others for this?

I'm lazy, so on the "score 10k" levels I just do donuts until all of my drift scores add up to 10k, then I cross the finish line.

Does anyone have any tips on how to get a "perfect turbo start"? For race 2-04? Thanks!

Most annoying game ever. Controls are erratic.

On 2-04 Perfect turbo boost you press accel just as the numbers appear, On all 3 numbers except For ready

I'll try this one. I will still probably go for Curse Treasure Dont touch my gem game, it's really interesting and most of all strategical type of game. Hence, right now I am still focus in Horse Racing Tips.

I am kinda confused with the controls, is it possible to change them?

Very Nice Game, i love it.