What do you dream of at night? Taking tests in your underwear, or bug-eyed monsters chasing you, perhaps? Nobody likes those nightmares, and waking up in a cold sweat surely isn't your idea of a good time. But what about supercharged bubble cannons, disgruntled jellyfish, or clouds with bipolar disorder? A ruined temple in the sky, complete with fallen marble pillars and ancient architecture? Now these are the makings of a really interesting sounding dream. It's all there in Askiisoft's quirky, short-but-sweet platformer Dream Hopper, made for the 2014 Nitrome Jam in just a few days. You'll use the [arrow] keys to move and [Z] to jump, with the [X] key allowing you to shoot bubbles, but happily the game also offers the alternate control scheme of [WASD] and the [spacebar]. Playing as some sort of drowsy emissary of the body, you are trapped in the dreams of someone named Jayson, who really just comes across as a huge egotistical jerk (a la Blue from the Pokemon games). Your progress forward will be hampered by his subconscious mind, which creates the monsters that inconvenience you so. Luckily, the labyrinth of Jayson's mind also harbors a good few powerups designed to help you fight these enemies. 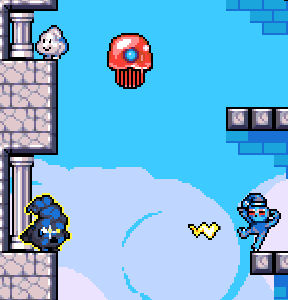 Besides the bubble shooter that you obtain early on, you'll also be able to steal new abilities by defeating certain enemies, giving you a limited number of floaty double jumps or wall jumps. This mechanic, along with the all-powerful charge shot, is evocative of the classic Megaman games. Heck, your character is even garbed in all blue! Aside from this, though, the two characters couldn't be more different. While Megaman is strong, vital and focused, the protagonist of Dream Hopper is sleepy, sluggish, and underwhelming. Moving him around truly feels like fighting to get somewhere in a dream—instead of relying on reflexes, you'll have to plan how and when to take on even the smallest of enemies. This is by no means a bad thing, though it may frustrate fans of intense speed-based platforming (see: Cat Ninja).

Everything about Dream Hopper screams "unique." There are a million platformers out there, but none of them feel quite like this. The physics, the theme, the mechanics. Even the health bar system is refreshing, requiring the player to collect a multitude of tiny spheres to increase their stamina instead of traditionally overpowered "insta-heal" items. The music suits the game well, bringing us both into an atmospheric dream world and an action based adventure. The colourful aesthetic is also one of the most delightful aspects of the game, sporting gorgeous pixel art by Francis Coulombe and mirroring the familiar, lovable style of a Nitrome game. The biggest qualm to point out with Dream Hopper is its short length; it ends very abruptly, and earlier than you might expect. This is much the point, and the reasons for doing so are without a doubt intentional, but it still feels rather lacking as an ending. This just means that we'll expect to see more of this excellent gameplay in the future. Sequel, maybe? Whether you're feeling dreamy or not, stick your head in the clouds and give Dream Hopper a go.

Sorry to hear you're having problems with the game, Wino, but without more information I'm not actually sure what the problem is. :) I can confirm the game loads and plays fine on Firefox on Windows 7. Please make sure your browser and extensions are fully updated, and make sure you're not running any adblockers, which can interfere with the running of some games.

I don't think intentionally bad controls like the way the charge gun works have a place in any game, ever. That being said, this game was pretty okay. I'd have preferred more permanent upgrades and maybe a second, more threatening/difficult boss fight before the end, but it was nice, small, enjoyable thing anyway.

(Unless of course the dreamer waking up wasn't supposed to be the end. But it wouldn't respond to my keypresses after that, so whatevs.

Holding buttons down for long periods of time does not my "dream"-game make. I get less RSI in nightmares.

Nathaniel: The reason it doesn't feel as polished as a typical Nitrome game is that it's not developed by them, only made in a similar style for the game jam they just hosted. :) I do think it's an easy mistake to make though, which is a testament to Dream Hopper's design!

Not very playable at all.

Reached leap of faith. Too far to make it.
Couldn't get past 1st boss either as that x-gun is garbage and his patterns are REALLY annoying.

Yeah, JoelyBean, you are onto something. This has the makings of a great game, interesting setup, good graphics, enticing storyline, but alas, it’s marred by sluggish controls. Particularly annoying is the fact that you can’t jump while attacking. So I’ll leave this game for now, can’t be bothered to finish it, there are just too many other good platformers to explore out there, but I would definitely look forward to a sequel or extended version where the controls have been tweaked and smoothed out.

My friend, I'm sorry you disliked the game. The Leap of Faith is impassable until you get a powerup after defeating the first boss, but it's not necessary to go there...

it's just a bunch of health upgrades!

Thanks for the feedback Judith! The sluggish controls are something that may frustrate a lot of people, but I felt the platforming was unique enough that it is worth a feature anyway. Jumping while charging would definitely be a plus. Hopefully we see that in the next iteration!