You have just acquired your very own amusement park! Nevermind the story behind how or why this long-held dream has finally become reality, it just has. Now you can't wait to dig in, to build the most fantastical new rides, finger-sticky concessions and amazingly popular attractions in Dream Builder: Amusement Park. As you create, not only do you get to build to your heart's desire, you'll also earn the hearts of your customers in this colorful and addictive building simulation from Fugazo. 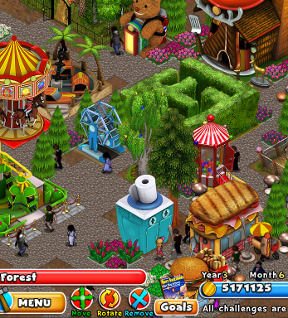 You begin at a desk where a map of four landscapes beckons your creative magic. To start, only "Sunvale" can be clicked on; the other park levels open as you gain trophies, and that's where the game really gets going. Time to design the most appealing amusement park you can imagine all while strategizing and carefully planning to best appeal to your visitors! This includes choosing which buildings to research and construct first, where to place your rides and attractions, and to whom to market your park. In addition, you're given challenges in the form of magazine goals; meet certain requirements to not only earn a feature in a popular magazine (thus gaining more park attendance) but also to get trophies and prizes such as hearts, coins, new research options and buildings.

As you achieve goals, others will become available, leaving you to decide which direction to take. Initially, money and hearts are not easy to come by, so it's possible to back yourself into a corner. You might want to play more than one profile until you've uncovered the secrets of amusement park success. Speaking of uncovering secrets, in a sort of Doodle God experimentation, find special combinations of buildings to make star zones and earn even more profits. Or, if you're at a loss, you could always buy the zoning secrets from the research menu. When you've completed your first park (or sooner, if you wish), you can move on to one of the other three parks, provided you have enough trophies. Each has a distinctly different theme with new goals, star zones and many unique buildings to discover. 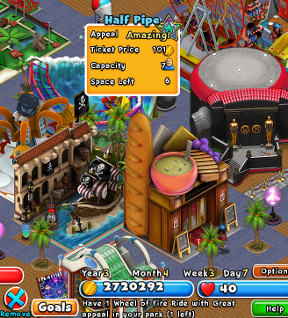 Analysis: Since this is the same developer that brought us Film Fatale: Lights, Camera, Madness! you know you're in for some good quality fun, even a bit of campiness. Fun is definitely what Dream Builder: Amusement Park does best. As there is no penalty for removing and rearranging items in your park, it opens up a world of possibility and amounts to great replay value. Even so, Dream Builder: Amusement Park lacks some polish, especially in terms of user features. The absence of those little—and not so little—extras found in iconic titles such as Sim Theme Park or Rollercoaster Tycoon means fans of those games could feel underwhelmed by the offerings here. You'll miss the ability to turn the game map to peek behind buildings or to zoom in and capture the expression on a visitor's face; those things help validate your creation and reinforce your designing efforts even if their absence doesn't detract from overall gameplay.

Most importantly, though, the enjoyment of planning, building and re-designing until you've reached the ultimate amusement park perfection is never amiss. The addition of magazine goals means a unique style of challenge that you can't get from those other building sims. It also allows an unmatched amount of freedom to design your every whim without consequence of bankruptcy or vomiting children. Once you've finished all goals, you're still free to continue refurbishing and building. In this way, Dream Builder: Amusement Park becomes a giant sandbox not to be missed by anyone who loves theme parks, building and creating.

If your if-ever-I-find-a-genie-in-a-bottle list of three wishes is topped by "I'd put Disneyland to shame" (because, obviously, wishing for more wishes is cheating), then stop rubbing rusty old antiques and build your dreams on this instead.

If you have more tips or tricks for succeeding in Dream Builder: Amusement Park, please share them in our comments section. Thank you!

This list is in alphabetical order. Some zones are only possible in certain park levels because the buildings required to complete them are specific to that park.

UNDER THE SEA ZONE:

-silver
One shooting gallery attraction
One snack zone
One arcade

Thank you to Kimberly for her help in creating this walkthrough!

If you have more tips or tricks for succeeding in Dream Builder: Amusement Park, please share them in our comments section. Thank you!

This list is in alphabetical order. Some zones are only possible in certain park levels because the buildings required to complete them are specific to that park.

UNDER THE SEA ZONE:

-silver
One shooting gallery attraction
One snack zone
One arcade

Thank you to Kimberly for her help in creating this walkthrough!

You said there is a walkthrough available, but all the links just bring you back here with no walkthrough. Please point me to the correct walkthrough, or I would suggest deleting all references to a walkthrough that doesn't exist.

The walkthrough is posted directly above your comments here. If you are not seeing it, make sure you are giving the page time to fully load then click on the "spoiler" box to reveal it. If the spoilers are not showing, check our support page to find information on updating your browser.