If you always liked playing Pictionary as a board game with friends, now you can doodle away mobile style with Draw Something. A game very similar to Charadium or XSketch, OMGPOP brings players a socially addicting Pictionary-style game to both iOS and Android platforms (previously featured here when it was first released as a browser game). The game has even become so popular that it could possibly spawn a TV show! 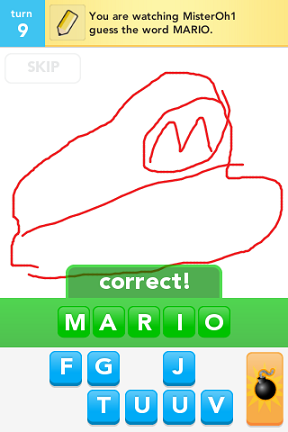 If you didn't like playing board games before video games came along or have never heard of Pictionary, here's the scoop. After finding a person to play with, one of you chooses a word, draws, and sends a video of the drawing process to the other player. The word chosen ranges in difficulty from easy to hard, but for those who are drawing-impaired, even an easy word can seem insanely difficult for your teammate. The drawings can even contain words if you draw them in, but that can occasionally ruin the mystery of guessing. (Words were especially helpful when Skyrim was the word and my teammate drew FUS RO DAH).

Teams are rewarded coins for correct guesses, and if you choose more difficult words, you'll get more coins. You can spend your virtual cash on things like bombs that blow away red herring letters or new colors to draw with. Who wants to stick with black, blue, red, and yellow when you can paint with an army color palette? Sadly though, the colors can only be bought while you are drawing your pretty picture and not from the main menu. A tad inconvenient, but not a deal breaker.

Draw Something gives off the feel of a social Facebook-style game, and its simple design bars no one from enjoying some wholesome fun. Without a timer to put on the pressure, players can enjoy making their drawings as artsy as possible and guessing the word as leisurely as they want. It can be endless fun, literally. Be warned, though, that because Draw Something utilizes random drawing partners, the possibility of catching inappropriate content exists. Usually, though, it's good, clean, Pictionary-style fun!

NOTE: This game was played and reviewed on an iPod Touch 3rd Generation. Game was available in the North American market at the time of publication, but may not be available in other territories. Please see individual app market pages for purchasing info.

It's a lot like words with friends but with pictures. It's quickly becoming my favorite mobile game. :D

Me too, @Lizz. My whole family spent much of yesterday afternoon trading pics and clues around the room to each other's devices. Lotsa fun.

It's just too bad that the app is currently really glitchy. It's fun but they need to work on that.

It has a hard time finding a random opponent. I got one to play, but when I searched for another, it hasn't stopped searching.

OMG i love this game SOOOOO much! Thank you for posting it!

No problem. I enjoy the game a lot. I would have never found out about it if it wasn't for this site and team.

A coworker of my mother's turned her on to this and it has quickly spread like wildfire to everyone we know. It's a ton of fun to play just be careful where you play it as you'll frequently find yourself yelling at your device's screen. Example: "What?! How is that a cat?! It looks nothing like a cat! And what are those weird things sticking off the side?!"

This game is making some kind of headlines for the developers' Cinderella story.