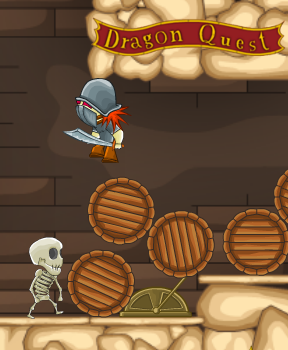 Fair warning: this isn't the other Dragon Quest. You know, the one with the slimes. They're totally different things. This Dragon Quest is a physics puzzle platformer by Meetreen Games that stars a crimson-haired knight out to rescue his friend from a nasty kidnapping dragon. It's probably planning on doing terrible dragon things to her, like forcing her to clean bits of previous crimson-haired knights out from between its fangs, so you need to get over to the dragon's lair and rescue her!

Use the [arrow] keys to move and the [spacebar] to jump. Swing your sword with the [control] key. Your sword is used more for solving puzzles than actual combat; the most common enemy, skeletons, are only stunned by sword slashes. Instead you'll need to use physics to destroy them. Dropping a huge weight on them usually works, as does shoving them into one of the castle's ubiquitous fire pits. In every floor you'll need to solve a puzzle to make a door key appear, grab it, then exit through the door. Most of the puzzles involve finding creative ways to dispatch enemies; a favorite has you dumping a skeleton into a fire pit by way of a wall of barrels, Donkey Kong-style! You also get to mess with a variety of physics-based props like ballistae and drawbridges. Finally, every few floors you'll reach a boss floor which will give you a chance to battle the dragon man-to-lizard.

Dragon Quest is one of the easier physics games we've featured on the site and it won't take you long to make your way through it. There's enough charm in the puzzles to make it worth a look, though. Just be careful... they say dragons have pretty terrible breath. Must be all those knights they eat...

Can't get past the second screen; the bloody log wont fall, even after I've cut the rope. Bah!

Yeah the same thing happened to me, I just re- positioned the ballista and shot a few more times. Eventually the rope cut.

The rope issue didn't happen to me the two times I did that level, but when I just tried it, it did! You have to make sure all the rope is gone - a good ballista shot will do it, but if one shot doesn't work just fire a few more.

Just finished this short but fun game. No problems for me at level 2 with a rope, I didn't even notice it?
Could be a bit more difficult for me though.

How do you beat the level 15 boss?

Each time the dragon pounds the ground, one of the rocks won't disappear. Hit that rock with your sword to send it toward the dragon.

can someone help me with the level 20 dragon?

My rating - happy little game that did not get too out of hand - maybe easy for the hard cor fraternity but I enjoyed it :)

If you are stuck at the level 2 log issue, just restart the level, reposition the arrow and fire again until it falls. Yeah, it is buggy like that.

How do I finish the 4th Level