Dragon Keeper is a game that tells the tale of a handsome prince who needs to rescue a fair maiden who has been transformed into stone by an evil witch. Yes, we've seen that story many, many times before, but this time around the stale old tale has been transformed by Running Pillow into an amusing and fun little time management diversion in which you need to raise baby dragons to help win back the princess and the kingdom. 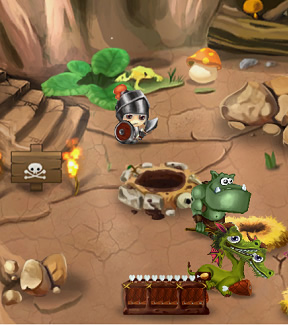 You begin, as these stories are wont to do, with the tale of the prince heading for the castle and his marriage with the lovely princess. Of course, an evil witch intercepts him along the way and warns him, "hey, buddy, don't do it, she's cursed!" And, of course, our hero ignores this advice and beats feet for the castle post-haste, only to have his special day interrupted by said witch and a bunch of curses which result in a stone princess, a sealed and enchanted castle, and our hero banished to the lands where dragons roam. Not to fear, though, for the dragons are a crafty bunch and know an opportunity to score some free babysitting when they see it. Mama dragon will happily supply said prince with the tools he needs to storm the castle, defeat the witch, and rescue the princess and in turn our hero will raise several generations of dragons (along with trolls, gremlins, and cave imps) to produce the gems the dragons crave to make some pretty lovely trinkets.

Mama Dragon will walk you through the process in a very handy tutorial, but it's pretty simple indeed. You begin with an egg which you must help hatch into a lovely little baby dragon. Once the little guy is up and running you must feed him and protect him from a variety of adventuring types (knights, wizards, thieves, etc.) who want to kill him or steal the gems he produces, or both. All action is accomplished by simple mouse clicking from feeding the babies to fighting the "bad" guys to picking up the little fellow's waste product (i.e. gems of various colors and shapes). Yes, Dragon Keeper is a game whereby you feed baby dragons and they excrete out gems for you to collect. Even more hilarious is fighting the "bad" guys, as each hit from your sword divests them of pieces of their clothing and weapons until they flee wearing only their undergarments, leaving everything else behind for you to collect for extra money. 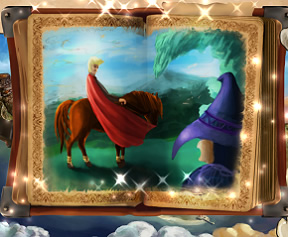 The action plays out in a similar way to the Farm Frenzy series of time management games with some differences. Dragon Keeper is not as...well, frenzied as Farm Frenzy, as actions like manufacturing jewels from your precious stones is done at night while all the little critters in your cave are sleeping (or hilariously sleepwalking). Each island you visit has a certain number of goals you must meet to get pieces of various magical weapons, and days run on an amusing little clock that starts at dawn and ends at midnight. Within the rather short day you must care for your dragons (and other helpful creatures), feed them, protect them, and collect every gem your chest can hold. At night you can forge those gems into various pieces of jewelry which you then sell for money to buy more (and different) types of dragons, other cave dwelling creatures who will help clean up the place, defend the babies, pick up gems, or feed everyone with one click. Each time you meet mama dragon's goals she will either give you a piece of a magical artifact (to be used in battle later against the evil witch) or unlock new types of dragons, creatures, or other useful items. If you succeed in the end you show that you have the right stuff to be both a dragon daddy and a brave rescuing prince.

Analysis: It's nice to see such a clichéd fairy tale being turned into a cute and fun little time management game like Dragon Keeper. The animations are hilarious, especially when the baby dragons first come out of the shell (wandering around with either little baby caps or pieces of the shell still stuck to them). The action can become fast and frantic, but not so much that this game is out of reach of the young or old, making Dragon Keeper literally fun for the whole family. 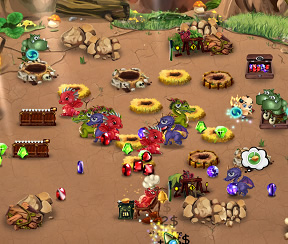 The story scenes are told in a beautiful, hand-drawn watercolor series of cut scenes, while the main action in the caves is bright, colorful, cartoony, and pretty detailed. What really pulls it all together though is the amazing series of tunes that play both during the day and night. You'll recognize some familiar tunes such as "Greensleeves", "Dance of the Sugar Plum Fairies", and a jaunty little Celtic tune that anyone who has played any of Tonypa's recent Flash games will recognize as coming from Kevin MacLeod, the amazing composer that provides the musical accompaniment for Dragon Keeper.

Perhaps the only complaint about Dragon Keeper is the fact that there are only four islands to visit and four main tasks to accomplish, along with the really short days. However this is a time management game we are talking about, so you can go back to the islands after you've finished the goals to continue to grow your cave population, or you can go back and wipe the slate clean and try to accomplish everything in expert time, or you can just start the entire game over again and challenge yourself to do it again more efficiently. Basically a lot of replay value to be had here.

So despite the short length of Dragon Keeper you're in for hours upon hours of addictive fun for the whole family, wrapped up in a cute little bow. Although more serious time management fans might scoff at the easier gameplay, Dragon Keeper succeeds in being a smart, amusing game that can be enjoyed by folks from 8 to 80. Time to try some serious adventures in babysitting.

I was able to finish the game in a single afternoon, but it was a pretty fun game while it lasted. I do wish that there was an option for endless days+escape to night for continuing a level, instead of the minute-long days that just continue. The gameplay's still solid, though.

I really like the game. However, it is rather frustrating not having any instructions such as how do you expand the cave? It seems to do it automatically on the first island but not the rest.

You need to buy an imp (under the creatures menu) to clear space in the cave. You start with space for only 5 creatures, only the imp can clear space for more. If you have 5 dragons, sell one and buy an imp. Once you have an imp remember to click on stuff in the cave for the imp to clear. It's better to clear plants first (they go the quickest), then wood, then rocks.