The number of "just one more round" games on mobile devices has increased dramatically since Jetpack Joyride gained its popularity (see the browser release Chuck the Sheep for another fine example). Each one features short stages, upgradeable abilities, in-game currency that can either be collected while you play or boosted with in-app purchases, and simple gameplay that grabs you within seconds of starting. Dragon Flight is one such game, though instead of going the route of sidescrolling arcade game, developer NextFloor plops you on a dragon for a vertical shooter that even casual fans can enjoy and (eventually) master! 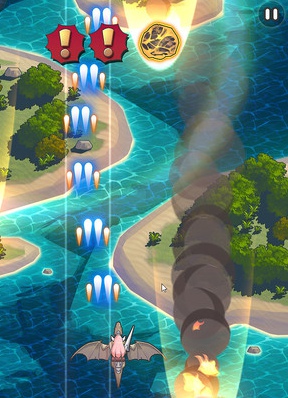 To play, all you have to do is slide your finger back and forth on the screen, maneuvering the dragon to spread its auto-fire attacks around and to avoid enemies and dangers that slip by the bullets. Baddies come in horizontal waves, forcing you to punch a hole in their defenses so you can slide by. Defeating enemies gives you coins, gems, and occasionally temporary power boosters such as double shots, distance boosts, and so on. You also have to be on the lookout for meteors, as they can't be destroyed and will put an end to your flight faster than you can say "dragons are better than meteors"!

Each time you play, fight, and die, you visit the game's shop where you can purchase items in exchange for coins. In-app purchases allow you to fill your purse with very little effort, though it's worth noting that one or two of these boosters goes a very long way. Enemies gradually get tougher as you survive the waves and travel further in the sky, and the dangers get more frequent and more difficult to avoid.

The comparisons to Jetpack Joyride and its ilk are inevitable, but Dragon Flight is far simpler than these games. There are only a few power-ups you can invest in, only one of which is a permanent upgrade. Also lacking are challenge missions to complete, it's just wave after wave of enemies over a variety of backdrops. A little more repetitive than you might expect, but the same level of pure addictiveness is still present. As an added bonus, even if you're not a fan of shmups, you'll enjoy Dragon Flight. It was made for the casual mobile player!