SEGA's free Android and iOS game Dragon Coins is weird to talk about, mostly because it's a weird game. On the one hand, it's a simple arcade title with physics that plays like those old coin pusher machines you can find on midways, in Vegas, and state fairgrounds anywhere. On the other hand, it's a surprisingly addictive and beautifully illustrated simplified Pokemon inspired RPG, where you battle, discover, level up, and evolve literally hundreds of different types of creatures through that coin pushing game in a series of fantasy themed adventures. Sounds like a recipe for endless mindless fun, right? But on the other other hand, it's also a game with a lot of in-app purchase and social/monetization options (though thankfully not a lot of nagging to pony up), and lots and lots of grinding. So while I like Dragon Coins for its vibrant presentation, casual gameplay, and "one more battle" style of engagement, there are also some issues that keep me from being in like with it, or at least as much as I could be. 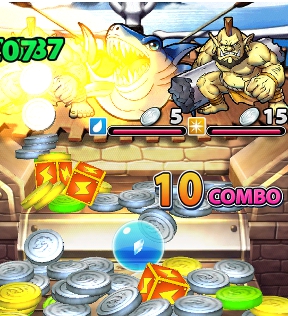 Everything in Dragon Coins revolves, more or less, around its coin pushing set-up that makes up its combat. You have a team of four monsters (and one "ally" monster you can choose from other players, online or not), and they attack when coins are pushed all the way off the field onto their portraits. (Anything that falls off the sides rather than the bottom doesn't count!) Drop coins by tapping on the shelf towards the rear of the screen... don't worry, it doesn't actually cost anything! While your monsters don't have hitpoints, you do, and each coin you drop on the field reduces the enemy's counter by one. When it reaches zero, they'll attack you, and if your hitpoints run out, you'll lose the battle and anything you might have otherwise earned. Helpful items can drop with the usual coins, from crates that will allow your monsters to use their special abilities, to green healing coins, gold coins to spend outside of combat, but arguably the most important drops are the round gems. The gems, which come in different colours to mark their rarities, are actually monsters you've earned, and any you get will be opened at the end of battle and added to your roster... provided you win, of course. If you do win, not only do you get the treasure you earned, but you'll earn experience towards leveling up, which increases the number of friends you can have, the maximum monsters you can hold on, and other things in addition to one of the most important... stamina. You use stamina to participate in battles, and though it regenerates over time whether you're playing or not, if it runs out, you'll have to wait for more, or fork over some cash for it. 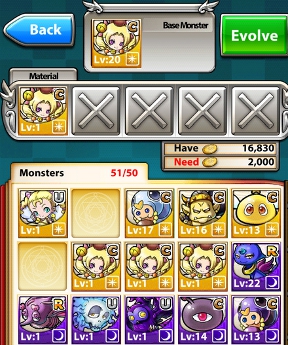 Since Dragon Coins is clearly gunning for the "gotta catch 'em all" Pokemon fever, it stands to reason that collecting and evolving the monsters is a big draw for the game. Though they lack any sort of description that might have given them some personality, the artwork is gorgeous, and the huge variety of them to gather will keep you grinding for quite some time. See, inevitably you're going to wind up with a lot of duplicates or monsters you don't want, and that's where Fusion comes in. When you fuse other monsters to the one you want to keep, you lose them, but the targeted monster gains a lot of experience and can level up. When it levels up, it gets stronger of course, but when it reaches level twenty, you can evolve it into its more powerful (and flashy!) form for even bigger statistics. Each monsters belongs to a different elemental type, with the standard strengths and weaknesses against one another in place, of course, and can have different growth rates that impact how strong they are later on (fast versus slow), but the thing that will keep you grinding late into the night are the rarities. You have Common, Uncommon, Rare, Super Rare, and even Super Rare Plus types of monsters, and to get the fancier kind, you either have to grind through battles hoping for drops until your fingers fall off... or pay. 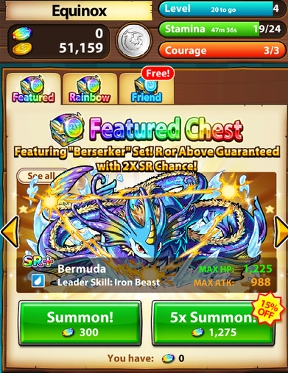 See, Dragon Coins, as you might expect from the name, is all about currency, and there are several types for you to spend in the game, some of which are easy to earn, and many of which are decidedly not. It's this overabundance of pointless complications designed to force you to grind even more that makes the game more frustrating than it needs to be... and a game this cute, beautifully illustrated and professionally polished in its design, and compulsively playable shouldn't be frustrating. It's concept is perfect for pick up and play sessions of a few minutes whenever you have time, and its social aspects feel rewarding rather than annoying. Though there is a decent amount of depth to monster types and special attacks, it does still admittedly feel like a numbers game, with random mindless tapping getting you just as far as strategy as long as your levels are high. At the same time, however, it's just challenging enough to keep you engaged and motivated to find and train monsters of different types. If you can tolerate (or even enjoy) a whole lot of grinding, then Dragon Coins is worth a look if you want a fun, simple, Pokemon-alike type game you can take with you wherever you go. Still waters don't always run deep, but they don't always need to if all you want is to float along on them and relax for a while.

I played this for a while. It's pretty fun, but one of the biggest deal breakers is that to evolve a monster, you generally need another copy of it. So if you pull something rare and flashy out of the summoning chests, you're stuck with its base form unless you have the luck or money to pull another one. The only upside is that most of the things in the premium chests also appear in the regular chests, though the monsters seem to be on rotation and your odds of pulling one aren't great.

There are plenty of other games out there that follow the formula of RPG monster collecting + other game during combat. Some of them have more established player communities, existing new player guides, and better balance. Some of them won't even pester you to hook the game up with your social media.

This looks like a very fun game, but the time-recovering stamina is a deal breaker. For the better part of a year, I was addicted to Quiz RPG, another simple mobile RPG with regenerating 'mana' that was heavily weighted towards in-app-purchases. I don't mind the occasional purchase to help a developer, but when a game is designed to hook the player and generate profit, you're better off skipping the game entirely.

Not going to lie, I am pretty addicted to this game... something about the coins. The shiny, pretty coins. Oh, and monster designs are cool, too.

I can see where some people would dislike regenerating stamina, but honestly... I don't really mind it. As mentioned in the review, this is more a game suited for a few minutes of play from time to time, and treated thusly, you never really feel pressured to pay anything at all. It's like Kingdom of Loathing's "adventures" currency, only it regenerates throughout the day rather than daily. For what it's worth, Dragon Coins is nowhere near as obnoxious as other free-to-play games about its in app purchases or I would have said so... instead, my primary issue was with the grinding, and the multiple other currencies, mostly because they were annoying... the only one you can actually buy is Rainbow. It even gives you daily prizes for playing, so after several days, I also have several free stamina restoring items. Obviously it's a matter of personal preference and if someone doesn't enjoy a particular pay model I would advise them to, as always, vote with their wallet by keeping it shut, but I also wanted to explain why the game's format doesn't bother me, as well as why I don't find it obnoxious or unfair. :)

Probability game is the trend of today's mobile and web games.

Super Rares, Super Super Rares and such are everywhere.

And the players and subjected to arbitrary probabilities, where they have to pay money to roll for new units (and hope that they get Super Super Rare!) or keep grinding for days, or even months to get it.

Seriously, I don't think this is a game. More like gambling.