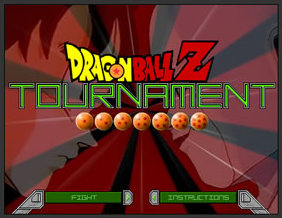 More pixel graphics today, with this game from the PixelBrothers based on the popular cartoon series, Dragon Ball Z, created by Toei Animation. In this turn-based fighter, you first select the character you want to play as, then compete head-to-head on your way to winning all 7 Namekian Dragon Balls. Doing so will allow you to summon the dragon Porunga. There are defensive moves, such as power-ups, as well as hand-combat and multiple energy attacks. A lot has been put into this little game, even a two player mode with each player taking turns to select moves.

While there appears to be some strategy involved in the game via the array of moves you can choose from, the gameplay is based mostly on luck with the success of each attack dependent upon each player's choices. A complex game of rock-paper-scissors played in a four-quadrant arena. It's a good game, just not one that will keep you challenged for hours. The graphics are pretty and the interface, reminiscent of StarCraft, is very nicely designed. Click.

Update: Apparently the Pixelbrothers have taken their game offline to the public, therefore the link above no longer works.

Do you know any other sites where you can download this interesting Dragonball Z game?