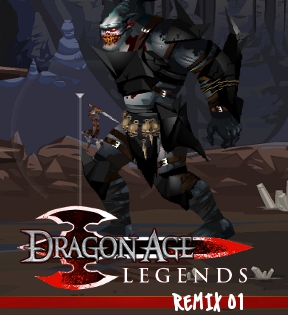 EA2D... Pixelante... by their powers combined... they are... Dragon Age Legends: Remix 01! Indie and Industry combine to bring you this fast-paced side-scrolling hack-and-slash action game set in the Dragon Age universe. If you're not a fan of the series or aren't familiar with the source material, don't worry; all you need to know is that you're controlling one lone hero against a vast army of the "darkspawn", hellish creatures and corrupted men and women who will do anything to stop you. Like being really big, really strong, and maybe even... really fire-breathing? If you're expecting an RPG you might be disappointed, but if you've been looking for some action, look no further, Warden.

The game is controlled entirely with the mouse; the hero moves in the direction of your cursor, and clicking on an enemy will let you introduce yourself with some heavy weaponry to the face. Click above your hero to make him jump over enemies and other obstacles, and depending on which attack style you select, your mouse movements also execute a variety of special moves that require mana. When in Ranged mode, for example, click and drag rapidly away from your character to unleash a blast that can attack enemies from afar. Both health and mana regenerate automatically, but if things are getting hairy, try to keep your eyes peeled for random item drops that can not only refill these two vital bars, but also provide temporary bonuses or extra experience points. Whenever you see a tent, just click on it to pop inside and spend any experience points you have on upgrading one of the various attack styles you can switch between.

Things will get more challenging the farther you go as the darkspawn begin rolling out the big guns to try to stop you; hurlocks give way to shriekers, teleporting cultists, archers, mages, and all manner of unpleasantness. (I tried to explain to Jay this was why I was late to work. He's so unreasonable.) Not to mention, of course, what everyone looks forward to in a hack-and-slash game... the boss battles. Loosen up your mouse wrist, because the limbs are going to be flying all over the place. 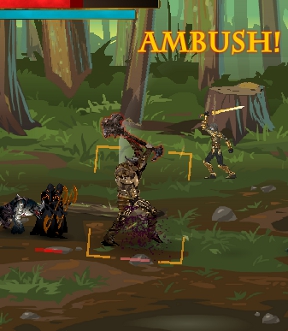 Analysis: Indie and In-dus-tree, create together in har-mon-ee! Combining talents is a beautiful thing, and it's clear Evan Miller of Pixelante Game Studios was a great choice to create a "remix" of an existing game; Dragon Age Legends for Facebook. (You can read more on the whole process behind this here link.) The result? This game is just plain fun, combining pure hack-and-slash with satisfying boss battles and some great enemy design and animation, complete with dynamic camera. As a fan of ye olde school(e) side-scrolling hack-and-slashers, however, I can't help but feeling destructible scenery is missing here to really complete the cathartic carnage, although I guess admittedly there aren't a whole lot of trash cans to throw and neon signs to blow up in Ferelden. (Maybe in Dragon Age 3? Bioware, EA, are you listening to me?! I'm giving away free ideas here!)

The combat system is simple to pick up and incredibly fun to fly around the screen with. Gesture-sensitive controls are hardly a new concept, but a lot of games that incorporate them tend to overcomplicate it by adding too much flourish, which is hard to pull off reliably when the gameplay gets frantic. By contrast, the movement and attacking here feel fluid and natural, and I never once felt as though I was flailing around like a first-year Hogwarts student with an uncooperative wand. There is, of course, rather a lot of clicking, and your clicker finger is going to get a bit of a workout, especially once you discover it can be fairly easy to stun-lock larger bosses by treating their faces like a set of bongo drums in mid-air.

The only other potential issue is that even on the higher difficulty settings, the game isn't that challenging for most of the time, owing largely to the regenerating health that means you're essentially unstoppable as long as you run around the screen letting the enemies chase you like a Benny Hill movie whenever your health is low. However, for what it is, Dragon Age Legends: Remix 01 is an exceptionally well-made piece of arcade action and It isn't a very long game, most likely running your average hacker-slasher about half an hour, but if action's your bag you'll enjoy the time you spend with it and emerge feeling like you're ready to kick names and take butt. (I always felt names were overrated.) It's smashing good fun and a great example of what happens when two powers combine their talent for the greater good of pulling off sweet combos and stabbing darkspawn in the face.

I'm having problems with this game. Twice now I've got to the lava stage and it has locked up on me. I can pause and resume but my character doesn't move.

Does anybody know how many levels there are?

Definitely having issues with this game. Get past the second stage that gives you a grade then it just seems like it is playing it self. There was a big guy on a bridge, beat him then got sick of not feeling like I was the one controlling the character went to quit and he was still jumping and attacking while I was no where near clicking on the game.