A boy, his gun boots, and a deep, deep well full of monsters, treasure, and randomly generated levels. Thus is the strange but glorious premise behind Moppin's (Ojiro Fumoto) retro indie action-platforming arcade game Downwell, also available to tantalize and grit your teeth at on iOS with Android coming soon. While the game recommends a controller, the default offering of [A] and [D] to move left and right, with left [shift] to jump and trigger your gunboots while in air, works quite well... and yes, there are other configurations too. The premise is simple. You're descending down through a well filled with hostile critters, blasting them apart with your gunboots by firing when they're beneath you as you fall. Your gunboots are automatically reloaded whenever you touch down, and if you venture into caves beyond special protective forcefields you can find different power-ups that change how your boots work, like devastating shotgun blasts or a burst of three spread shots. The gems you pick up can be used to purchase items at shops, and whenever you complete a stage, you can pick a single upgrade to enhance your hero with... until he ultimately dies when his hitpoints run out and you have to start aaaaaaalll over from the beginning. Fast-paced, happily weird, and addictive, Downwell is guaranteed to make you dissatisfied with anything you find in a shoe store going forward. 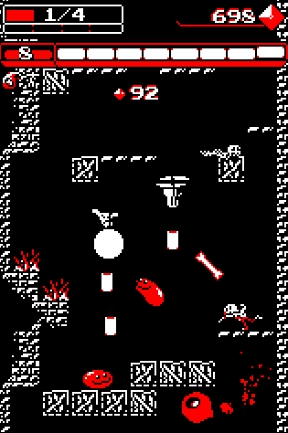 Although it may seem simplistic on the surface, Downwell injects a lot of variety through its enemies and how they behave. Most can be bounced on Mario-style, for instance, though you'll need to figure out which are painful to the touch, and some will move or otherwise behave differently around you. It keeps Downwell from feeling like a mindless twitch game when you need to think and adapt on the fly, and every few stages you'll find yourself in a new environment with new dangers. You'll also get different unlockable colour palettes, if the red doesn't speak to you, and "styles", which can modify the game slightly to make it more difficult. Downwell's breezy, frantic gameplay is the sort of thing that encourages "one more try" about twelve more times each time you die, and the simple yet responsive controls and mechanics work in its favour, not to mention the classic pixel-art and fantastic soundtrack by Eirik Suhrke. While some may find it repetitive, others will embrace the creepy aesthetic and the finesse require to adjust your playing style on the fly to make the best use of every weapon in every area. Downwell is a game that does a lot with a little, and the end result is a game arcade fans will be drawn back to again and again, one glorious boot bullet at a time.