First of all, let's just be clear that Damian Schloter's new game, Double Hitler, does not endorse or glorify Nazis in any way. It's satire in the vein of Mel Brooks or Monty Python, tweaking the nose of one of history's greatest monsters. If you're not offended by the idea, you'll find an exceedingly silly and well-crafted comedy game bearing a strong resemblance to QWOP or a 2D OctoDad. You play as the Schicklgruber brothers, two young boys with dreams of exploring the world of art, politics and adulthood. They don a trenchcoat and silly mustache and set out on their quest to achieve greatness, accidentally triggering a little mishap called World War II in the process. Gameplay revolves around completing simple tasks such as drawing or delivering a speech without falling over. Move the feet with [WASD] and balance the upper body with the [arrows], using the [spacebar] and mouse to point your paintbrush. Like many comedy games, it's just as much fun to watch yourself fail as it is to succeed. 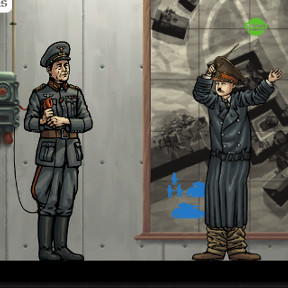 The controls are intentionally sluggish... the Schicklgrubers are no great shakes at balancing and the little faces of shame they make when they tumble to the ground is just adorable. There's a point system but this is less a game about winning and more about losing the least. There's a charming little storybook act structure that adds to the absurdity of it all, bolstered by a somber piano soundtrack that could have been lifted straight out of a Tchaikovsky ballad as well as a gorgeous art style. The game doesn't overstay its welcome, ending just as the joke starts to wear thin. There might be some hair pulling around the extremely difficult third act but rest assured it's all doable. If nothing else, it's a lot of fun watching "Hitler" stumble and flail his way through history. For an extra challenge, get a friend to operate the feet while you do the arms. Mr. Schloter's Double Hitler offers a silly, weird and extremely well-crafted example of gaming satire. Here's hoping there's more to come from the developer in the future.

Having trouble on a Mac as right click brings up the Unity menu.
Seems like an interesting concept, but unplayable for me.

"There is a wall there" part is completely impossible to do.

I'm Hitler! If I want tanks to go there, they better go there!

I found the extremely floppy nature of the boys amusing but also annoying. You were essentially managing two mouse buttons, two keys and the mouse all with little room for error.

I quit at the 3rd troop movement.

Still it is a neat premise and the game looked great and was responsive.

Controls were not difficult to grasp, but when leaning with the paintbrush and moving sideways while adjusting for the static bounce of your arms it was tough. Much like it would be in real life.

Cool idea, but I quit the first level... I think I'd rather just watch someone else play. Youtube anyone?

This game is going to make me rage quit. I can't get past the third and final drawing of the troops movement towards the enemy. The mechanics are absolutely ridiculous! >:( >:(