The original Doors: Out Of Office saw everyman Dave desperately trying to sneak away from the dreary confines of his cube farm, so it's not surprising that the lug has sought new employment out of doors. But when his new construction co-workers strand him on the top floor of an unfinished building, he finds himself in familiar, physics-bending, puzzle-platforming territory. It's Doors 2: Dave's New Job by Arctic Arcade. 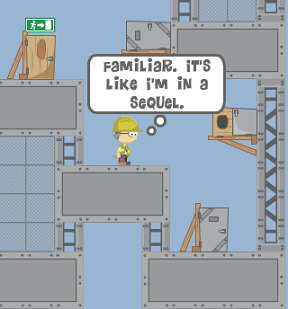 In each level move and jump with the [arrow] keys. When you see a door, you can enter it with the [spacebar], and will exit from its matching pair in another part of the level. Some doors will require key cards to get through. However, if that door happens to be on, say, the ceiling or the walls, gravity will rotate as you come out the other side and the screen will tumbling to demonstrate, tumbling crates and other objects into a new position. Crates can also be moved with the magnetic cranes that appear on some levels, so presumably, they must be filled with cobalt or something. Watch out for unstable blocks that will crumble when you walk on top of them, and those deadly looking electric streams, though some can be turned off with the flick of a switch. There will also be "friendly" co-workers searching for you. While getting caught by them is game over, they will fall victim to your shifts of gravity, so it'll be a snap to keep them occupied as you travel through all 25 levels. Doors 2 definitely keeps up the mellow vibe of it's predecessor: its gentle challenge (at first), gentle humor, and the infectious "Oh yeah!" Dave exclaims upon the completion of a level make it easy to like. Earlier versions of the game had a bug where progress was not saved on the level select screen, but even in the fixed version, it's definitely a game that most will complete in one sitting. So plop a hard-hat on your noggin, and get to work playing!

I would like it much better if you could press down to go through a door, then you could play one-handed.

I guess on level 18 the intention is to let the ''enemy'' walk onto the red button which creates a step to the exit door, but no matter how or when I turn the room (using both doors) he always falls so that he can't.
Am I missing a step?

You don't have to wait for your coworker to hit the ground before you go through another door.

Why are the crates made of wood and not metal? I was trying to figure out what to move on that first magnet level.

Game has a level select screen, but after getting to level 21 and exiting to see how many more levels I had, I was only able to start playing again on level 1. Epic fail, I walked away from it.

@username the same thing happened to me yesterday. When I went back to menu and level select it would only allow me to level 1. TODAY however having totally quit the game and hit play it had indeed saved and I was able to continue.

Perhaps, for some reason, you have to quit the game completely for the save game to show up.