Did you know that doodling during class or meetings can help improve your recollection? It's true. While we can't promise that playing Aleksander Suvak's Doodle Brigade will grant you photographic memory... And we definitely don't advocate slacking off during algebra, even if this game is available on Android devices to play on the go... we can promise you upgrade-tastic tower defense game action! Your paper kingdom is being invaded by stickman zombies! How can you tell they're zombies? Because they're drawn in green ink, of course! Fight them off with a stick-army of your own, full of snipers, bombers, mines and more. Click on any empty square to draw in a new soldier or tool, keep an eye on your precious ink resources, and make sure all the rows on your graph paper are amply defended! There's no denying it's a familiar and well-worn formula, especially if you're a fan of the by-now legendary Plants vs. Zombies. But Doodle Brigade is one of those rare copycats that actually understands what made the original great, and manages to emulate it while still putting its own spin on things. 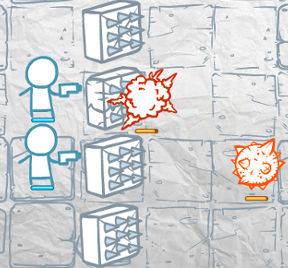 The lane-based tower defense approach and hordes of encroaching undead are all recognizable sights, so Doodle Brigade won't win any prizes for originality there. However, the game does deviate from its inspiration in the emphasis it puts on upgrades and enhancements for your units. Every offensive unit you place starts out as a simple, basic soldier, with a slow rate of fire and a low damage output. However, these generic units can be upgraded down four different career paths, each with varying levels of power. You'll have to pour quite a few resources into them to bring out their full potential, which makes the individual units feel more valuable and encourages you to protect them better. It also gives you a nice degree of flexibility in customizing your field, as you can draw in basic soldiers for a quick defense boost when you need them, and decide on more specialized roles for them later. Doodle Brigade also manages to get its pacing just right; enemy waves come at you quickly enough to keep you engaged, but not so fast you feel overwhelmed. And while the game is rather short when all's said and done, it does have branching paths and alternate challenges you can unlock to give you something to sink your teeth into. It's capped off with a charming sense of humor and clean, well-animated graphics. Doodle Brigade may not be claiming any new territory for its kingdom, but it does the familiar well enough to give that tower-defense itch a satisfying scratch.