Don't you just love the great outdoors? The majesty, the wonder, the fresh air, the creeping horrors waiting for darkness to fall and your last bit of firewood to be consumed to strip the flesh from your bones and give you a respite from the gnawing hunger in your shriveled belly? Hooray, camping! Klei Entertainment's Don't Starve (currently in playable beta) is an indie action adventure game with a heavy emphasis on survival and crafting as you struggle to keep alive day after day the a bizarre and hostile environment you've been transported to by a malicious demon. From insulting and unhelpful pigmen, to plains full of fiercely protective one-eyed giant birds, vicious spider queens, pursuing hounds, Krampus, and much, much more, Don't Starve may sound like a simple objective, but, y'know, that's if the world doesn't hate you and want you to die as horribly as possible. Sort of like dealing with any tech support, ever, if tech support liked to hang out in the darkness and savage you every once in a while. Which, let's be honest, we all sort of suspect it does. 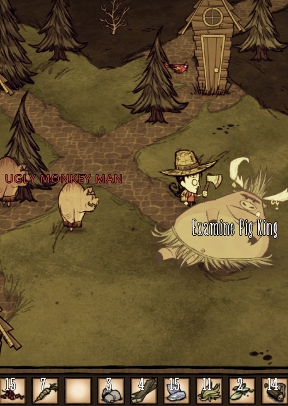 Don't let the lack of a tutorial or instructions put you off... it might not be easy, but Don't Starve is actually quite simple to play. Just click to move around and interact with characters, animals, items, and your environment. [Q] will rotate the screen, and [TAB] opens your map. Your primary concerns are food and health, indicated by the heart and stomach icons on the right side of the screen. As time passes, your tummy shrivels away to nothingness to the point where your character probably starts hallucinating everything as talking hot dogs like an old Bugs Bunny cartoon. Fortunately, you can find food everywhere... sort of. While berries and carrots can simply be plucked from nature's bounty if you're in the proper terrain, some biomes are lacking in the food department... unless you consider animals. You can set traps to capture helpless critters, take an axe to monsters, or even your piggy neighbours... provided, of course, that you're prepared to deal with the consequences of being a naughty murderer. Alternately, if you can find seeds and the stuff to build plots, you can also set up farms. Since items stack, don't be shy about gathering as much food (and resources) as you can whenever possible, especially if you plan on traveling far.

Equally as important is a source of light. While by day you can see where you're going and avoid any threats coming at you, when night falls it's a completely different matter, and the pitch blackness will mean certain death if you can't find a bit of illumination very quickly. In the beginning, that's probably going to consist of a shoddy, unsafe jumble of sticks and dead grass, but we all have to start somewhere. Just, uh. Just make sure you don't feed the flames too much... or that you aren't in the middle of a bunch of highly flammable things when you do. You can cook food on your fire, or feed it more fuel like logs, pinecones, and other things when it gets low. 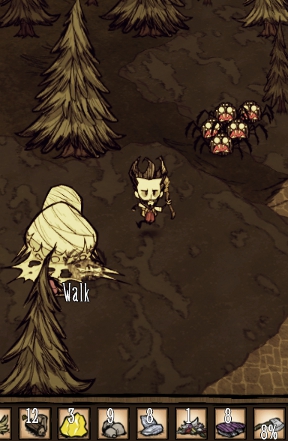 But don't worry! Though you only start out with the clothes on your back, a bit of ingenuity and the willingness to scavenge everything from wood to precious minerals to beefalo poops will go a long way. The vertical bar on the left side of the screen represents all your available crafting recipes, from tools to weapons and much, much more. Click on an icon to expand that category. If an item is only shown in silhouette, you lack all the ingredients to make it, but you'll also be shown exactly what you need to gather, and once you have everything it's just a matter of clicking to build it. If an item is shown as locked out, however, that means you'll have to research it before you can make it. You'll need to first build a Science Machine and then feed it items to generate research points, which you can then spend on unlocking new recipes. Of course, once you die, you're dead for good (unless you've managed to craft a certain thing or two), but not only do all your unlocks stay unlocked and you keep any research points you've accumulated, you can also choose to either generate an entirely new world when you start again, or replay the last one. Plus, you'll gain experience that slowly works towards unlocking new playable characters, each with their own subtle abilities.

Analysis: Don't Starve is all about trial, error, and running for your life. Trying to survive in, say, Minecraft if you're a new player is difficult enough, and even though Don't Starve's crafting system is much more straightforward, the sheer hostility and alien-ness of your environment makes the game a pretty significant challenge when you're just trying to figure out how things work. Is this animal going to race over and trample my weak, fleshy body into the dust for looking at its nest? Should I eat this drippy purple hunk of spider meat I carved off a corpse? The fact is, though, despite how disorienting the game is at first, a good hunk of Don't Starve's appeal comes from just how much fun discovering how the world works. There are so many neat little touches to discover that you can get lost just experimenting and exploring, and the clean, friendly user interface makes this a snap to jump into. 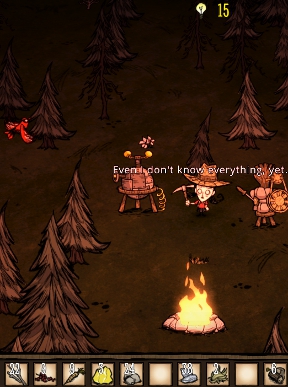 As of this writing, however, while the game is still in Beta it almost feels like the title of the game is the only real goal after a point. Very early on I somehow managed to generate a world so packed with grave-robbing riches (which can provide some of the most research points) in such a small area that I had managed to research everything almost right away. Lacking more of a narrative, it sort of felt like I was aimless without that particular objective to drive me on. It's times like that that really make you pine for a multiplayer option, which the team has said is unfortunately never coming as the game was always intended to be a single-player experience. As a single-player game, it's still a ton of fun, of course, and it's constantly receiving updates with more content. Not just bug fixes, but new monsters, animals, items, and more. Discovering all of this is a joy, and any time an update hits it feels like getting a big wrapped present... one that will probably immediately prove fatal, but isn't it the thought that counts?

Klei's customary stamp of quality is all over this one, and the game is as fascinating to play as it is to look at. The final and perhaps most obvious selling point of the game is how great it looks. Which is, y'know, pretty great at that. The animations are wonderful, the sketchy, twisted storybook designs are gorgeous and expressive, and the musical chatter of your characters is a wonderful touch. Very "Peter and the Wolf"... if Peter was a pyromaniac and the Wolf was a flaming hound from the realms that never tired. It won't be for everyone, of course. Permanent death is a hard pill to swallow if you're more of an easy-does-it type gamer, and the game lacks insane levels of building and customisation if that's your thing. But Don't Starve might just be the most unique, gorgeous, and darkly funny survival adventure around... and one that just keeps getting better to boot.

Thanks for reviewing this!
By the way, this game works fine on a Mac so long as you have Google Chrome or Steam on it.

I only see the links to order the full version at the bottom of the review. Is it safe to say I missed my chance at the demo? :(