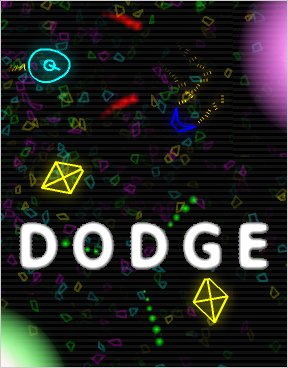 This is going to be a little tough to accept, but Dodge is a game where you essentially dodge things. I know, naming games based on what you do in them is a radical concept, and perhaps the world isn't quite ready for it yet, but that's the risk that developer Moogoat decided to take.

Dodge is pretty much your run of the mill avoidance game except you use the arrow keys instead of the mouse, you can pass through enemies as freely as a ghost, and instead of just playing to see how long you can stay alive, you actually have to complete levels. Hmmm... alright, maybe avoidance doesn't work so much.

Okay, let's try this. Dodge is pretty much your run of the mill classic arena shooter game except you have no weapons, none, never. Neither are you ever awarded any power ups, nor do you even have a semi-sharp attachment on your neon blue carapace with which to gouge your enemies by running into them at just the right angle.

Now wait a minute, here's a game where you have to face wave upon wave of enemies, and you don't have so much as a dull spoon to defend yourself with? That's not fair, you may think, but this is the fast-paced and frenetic hand you've been dealt, serving up a bountiful feast of action-y goodness that's hard to put down.

Using only the arrow keys, you must guide your little blue craft through twenty stages of lethal neon madness. You don't have any weapons of your own, but the hundreds of enemies eager to see your undoing have more than enough to make up for that, and thus the only thing you can do is turn their heat seeking bullets right back onto them.

Your foes start out simple, but as the game progresses you'll be faced with more challenging units, from little teleporting purple squares that make the screen blink before sending ultra fast green bullets your way, to orange snipers that do some serious damage with their doubled-up lasers. To your benefit, your life bar is considerably generous, and at the end of each stage you'll have the ability to refill the whole thing at the cost of 25,000 points off your score. Can you dodge your way to the end and earn some serious bragging rights, or will your vessel be joining the rest of the shattered remains that litter the floor? 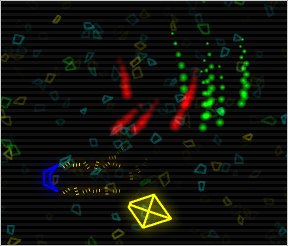 Analysis: One sign of a great game is the ability to instill in you a feeling that you're doing something jaw dropping and awe inspiring even though you're doing little more than pounding away at your keyboard or controller. This feeling is Dodge's wheelhouse; it's hard not to get a surge of adrenaline as you plunge head first into a hail of red and green bullets, cackling wildly the whole time, "Can't catch me, I'm the gingerbread man!!!" (Please, someone tell me I'm not the only one screaming this as I play this game… please!)

That's to say that the gameplay in this game is tweaked to twitch-inducing near perfection. Every time you dodge a bullet feels like, well, dodging bullets, and redirecting half a screen's worth of enemy fire onto a cluster of baddies should hit your action gamer's pleasure center like a lightning bolt. As the game gets progressively more challenging you may think, yeah, the hundreds of bad guys you face can be daunting, but you're faster, more clever, and better than they are.

The trick, though, is that Dodge is not really as hard as it may look or feel. The life gage is very forgiving, granting you a ton of hit points while enemy fire doesn't really do all that much damage to you in the first place. On top of this, by the time you may need a refill every other level or so, you should have the points accumulated to easily afford this.

While managing your health takes some of the challenge out of the game, the enemies themselves aren't all that difficult to contend with either. They each have easily identifiable patterns, and the three types of enemy fire you have to contend with become predictable with just a little practice. As a result, what you have is a game that is moderately challenging, but feels much more intense thanks to solid gameplay balance and art direction.

Aesthetically speaking, Dodge does little to stand out. The whole simple geometric shapes in neon colors on a black background is a fairly common motif these days; not quite to the point of being overused, but not exactly fresh either. One nice little touch I appreciated, though, is how when an enemy bites the dust, its broken remains stick around, so that by the time you've gotten to the end of the game the backdrop looks completely different than it did in the beginning.

Nor is the music destined to find its way on the Billboard charts. Standard techno fare that meets the needs of an action game, no more, no less. No, neither the music nor the visuals are particularly outstanding, but in a way that's a good thing, and keeps the focus on the action where it should be.

Two other minor quibbles. The controls can feel just a touch clunky. Maybe it's just that I'm spoiled by analogue control providing full 360 degree movement, but the eight directional movement can feel just a little unseemly, especially when you first pick the game up. The other problem is that as intense as this game is, it is also highly susceptible to slowdown. This actually makes the game easier, of course, but can do a lot to reduce the high-strung feel that it is going for.

But those places where Dodge is lacking don't come close to denying the fact that this is an insane thrill ride wrapped nice and neat in your browser.

If anyone wants some assistance with strategy, here is a video I made of the later levels in the game:

Pretty much, just move around the edges 90%+ of the time. The bullets disappear upon hitting the wall. For the green guys, it sometimes is better to go towards them as they explode, as then the projectiles will go around you instead of into you.

Totally agree with this review -- except the part about the gingerbread man. Sorry Kyle! (my internal monologue's more like "whee!' and "take THAT!")

Lots of fun, relatively quick, and not at all impossible, despite appearances.

See, I was thinking of going with, "I am a leaf on the wind, watch as I soar!" But figured the movie reference might be a little too obscure. I've done it once or twice before where I'll toss out a little movie reference and have absolutely no one pick it up.

While I must concur that dodge is quite fun, it does seem to borrow very heavily from kryzta, a game released by cactus a few months ago.

That was one of the most touching scenes in the film.

@guest... with fear that this devolves into a browncoat forum (I shall keep my comments as such to a minimum), the whole 'verse involved is touching and bittersweet for me, what with a midseason cancellation and all.

Very fun. I remember getting to level 20, and thinking "Ha ha, look at all the silly yellows, blasting themselves." Then the blues show up, and my mind went "Ha, they are still stupidly shooting each other." And then the greens. "OH S***!" Purple. "AHHHHHHHH! RUN AWAY! RUN AWAY!" Followed by orangey death. Most awesome.

Yup, that was pretty much my feeling on the last level too.