Of all kinds of artists, musicians tend to be at the forefront of experimenting with new ways of interacting with their fans. In that vein, Dutch band Light Light, in conjunction with Studio Moniker, has put together something quite clever. Do Not Touch is a piece of HTML 5 interactive art that serves as the "crowd-sourced" music video for Light Light's new single, "Kilo". 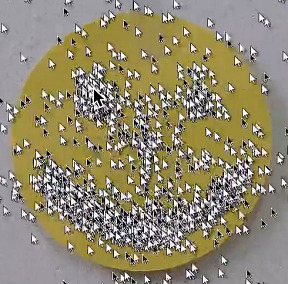 Displaying the movement of fans all over the world, en masse, is the basic concept of the video. As you watch the song play out, you will be directed to move your cursor in different ways, in conjunction with the thousands of cursors from people who have already watch the video. These directions range from answering basic questions, to forming shapes along with other cursors, to interacting with video footage of band members. Once you finish watching the video, the tracked movements of your own cursor will be added to the ever-growing collection. Overall, the song rocks, the developers make the most of their unique concept, and it's fascinating to see the internet hive-mind in action. Perhaps Do Not Touch can be considered a game only in the broadest of terms, but, hey, it's fun, it's interactive, and it's definitely worth sharing.

Play Do Not Touch

Has some nudity later on (mostly covered up by thousands of mouse pointers), but can still get a little awkward if you are in public.

This 'game' was hilarious. Maybe later I'll post a walkthrough ;)

Novel concept. Had me chuckling in several places - the things people wanted to see and what they chose to cover up.

That's why the game has the orange rating applied to it. :)

I can't distinguish my cursor from the rest. I don't know what to do.

Your cursor should be just a little larger than the rest.

THIS "GAME" SUCKS. IT�S THE WORSE "GAME" THIS SITE HAVE EVER POST.

THAT WAS AWESOME. I thoroughly enjoyed every second of that.

I was wondering what the rating-o stood for. Clicking it only shows me other games with the same rating rather than what it might mean. Guess I know now!

All category tag links will take you to a page with games that share that tag.

If you click the rating icon in the review header instead of the category tag, you will be taken to the page where all our ratings are defined (https://jayisgames.com/about/game-ratings).

The ad at the start played over the beginning of the "Game", so it started kind of weird and abruptly. Once it got going it was really cute, though.

I especially liked the part with the green blob. It was fun seeing people following each other, or getting faked out.

The nudity is unfortunate, though. It doesn't bother me, but it makes me reconsider linking this to friends who would otherwise like it.

What a fantastic idea! from all crowd based interactions and experiments, this is the most visual one, it's awesome.

The only problem is that it keeps stopping, maybe it's my internet connection but it got to a point where it never returned... :(

Agh, I was coming here to post this!
At least my mouse is probably somewhere in those pictures.

While I COULD barely see the areolas earlier today, it looks like now you can't see them at all! Now we've just got to wonder if this is people who oppose nudity in "public" or people who want to pretend they're actually touching it.

I am tempted to call shenanigans on this. The "crowd" does not appear much different today than it did yesterday. Is this a hoax?

Also yesterday, my mouse cursor did not appear at, but it did today.

Either way, this is a fun little exercise, but definitely a one-and-done experiment.

It was a nice gimmick. Rated 5/5 for originality.
Hopefully my browser isn't playing up again.

I was also tempted to call shenanigans, and then I reflected that it wouldn't make any difference at all to the experience whether this was real or fake.

Whenever I go to the window, it will start by showing me a black screen with glimpses of the cursors and a thing in the center that flashes between a pause button and a load symbol. After the questions start, it goes black and stays black. I can't figure out what's going on, but it's obviously not working right and I would like to play. Any help?

Firefox (not sure what version of it) Windows 7, Flash player 6

I loved this - so fun and awesome to think about hundreds of people doing the same thing.

I just wish your cursor was bright red or something. I lost mine so many times in the sea of arrows.