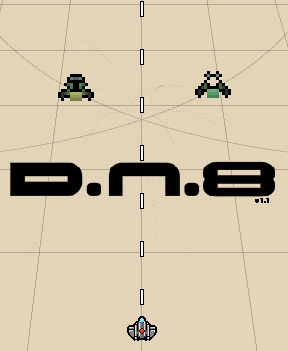 I'm always hearing about how the next evolution in gaming is right around the corner. Whether its a handheld that enters the third dimension by giving you a headache, a new brand of controller that only does everything its competitor did years ago (except with a glowing tip), or a motion sensor that requires an intense pilates workout to do everything that a "start" button could accomplish, it's clear that we are innovating far beyond our wildest dreams. However, for those shooter-lovers who would like to see the effects of evolution right at their fingertips, there's DN8, the new dynamically-generated bullet hell from intelligent-designer Squize. It looks pretty fit to me.

DN8 is played entirely with the mouse, with your ship auto-firing its weapons as you play, taking out dozens of path-tracing pixel baddies. You start out with a dinky horizontally moving single-shooting spacecraft, but each wave completed cause you to "evolve" into a ship with a new ability. About half of these end up being the direct result of player-choice, sending you on one combinational path or another. Bonuses are awarded for enemy kills, mutations, and grazing bullets. Can you make it to the top of the evolutionary ladder?

The main gimmick of DN8 is in its branching abilities system, which provides a unique alternative to the upgrade-plethora of most casual shooters. You'll have to get a good balance of offensive and defensive evolutions to make it through to the end, and depending on what you decide on, similar levels will end up playing completely different. Some balance issues are palpable (as some abilities seem vastly more useful than others), but that may just be the result of me adapting the game to my personal play-style: for instance, I was never quite able to get the hang of the bullet "grazing" mechanic, so I tended towards more defensive upgrades. Those with better mouse-eye coordination might choose differently, and end up with a final ship that shoots and plays much differently than mine, if just as entertaining. That's a good thing, especially when you throw in the randomly-generated enemies and soundtrack. There's quite a bit of replay value for shooter lovers (though I think its cross-genre appeal will be limited).

The phrase that best describes DN8 is "Visually Interesting". There are a ton of cool explosions, pseudo-3D effects, and gyrating backgrounds delivered here. Indeed, there is so much to look at on-screen that eye-overload is a distinct possibility. However, I think this this assault on the senses was intentional: victory comes not just as a result of a steady hand and proper aim, but the ability to focus through the swirling masses in front of you. It would be tiring if it weren't so friggin' cool looking. It is true that not all of the aesthetics work together: the 16-bit player character clashes quite deeply with the 8-bit enemies and the 32-bit backgrounds in a way that felt quite jarring as time went on. That said, those who are able to stand the vertigo of flashing lights and colors will find DN8 to be definite progress.

What does the graze meter do? I can fill it up every few levels, but it doesn't seem to do anything.

@Aegeus: Filling up the graze meter gives you an extra life.

Reading the review I got the impression that the game took note of how you played and upgraded your ship automatically based on that. Instead there's a fairly limited tree where you get a choice of two upgrades every other upgrade. I think that the automatic mutation based on how you play would have been better. If you're going to have people upgrade their ships based on how they play, then just let them choose from any of the upgrades. They'll upgrade the ship based on how they play anyway. It's not like I can see this mechanic adding any replay value to the title.

Finally, someone who actually knows what one of these things is supposed to play like, but the sound effects were kind of annoying.

The game forced me to take a defensive upgrade, which sort of ruined it for me.

It's a clone of Space Invaders Infinity Gene, right up to not giving you vertical movement until stage 2, and the whole evolution theme.

It was a little too easy, especially compared to other bullet hell games like Ikaruga or Bullet Heaven. If you're looking for a quick little game though, the music is pretty good.