Let's get one thing straight early on... Larian Studios' turn-based RPG Divinity: Original Sin is not cheap, but it is huge, clever, entertaining, challenging, and packed with replay value. Set well before the events in Divine Divinity, you control two characters you'll create from scratch who are Source Hunters. Typically tasked with tracking down people who use magic for evil, you find yourselves sent to a remote seaside town to solve a murder, but quickly realize something big is happening. It's up to you and a group of rag-tag companions to save the world... but you'll have to do a lot to get there. Like join a pyramid scheme. Dig up graves. Unlock a portal dimension. Settle a blood feud. Help a cat find true love. Decide the fate of a lovestruck orc. And that's just before you leave the town! Sporting a new turn-based battle system that makes use of the elements in creative (and devastating ways), stunning visuals, party members, and all the piles of sidequests, humour, and exploration fans of the series have come to expect, Divinity: Original Sin is both massive, and massively fun for fans of classic computer RPGs and newcomers alike. 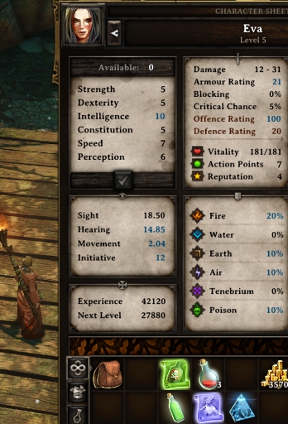 At the start of the game, you'll create your two heroes from the ground up, choosing everything from gender to appearance and, most importantly, class and skills. Original Sin is extremely miserly with its levels, which means points to distribute into attributes and skills are very hard to come by, so planning out your characters and their progression in ways that compliment each other is a must. If you've got a magic user, for instance, who can teleport enemies, you can drop them down for heavy damage... right in range of your melee fighter who wouldn't have been able to reach them otherwise. One of the things the game (sadly) doesn't make clear is that to raise a skill to the next level, you need an equivalent number of points. So for example, if you have one point in melee, to raise it to two, you would need to reserve two skills points to apply to it, and then three for level three, and so forth. As you travel, you'll gain several other party members who can lend their abilities to you, but your two heroes should still be your top priority. NPCs who can repair armor and weapons are scarce, so having someone in your group who can do so will quickly become important since those items decay the more you use them. 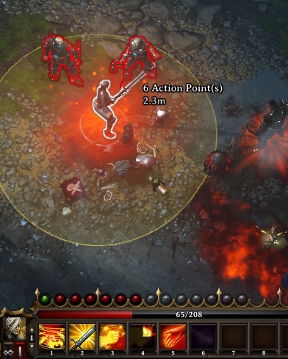 Combat, you'll quickly discover, is serious business and is an enormous part of the game. Enemies frequently outnumber you, and if they're even one level higher than you, you're probably going to get your nose bloodied at the very least. It's not just a numbers game either. A big part of battle is figuring out how to use and manipulate the elements, both those already on the field and any you can bring in yourself. All of them interact with one another, and can drastically turn the tide of a fight if you're clever... or clumsy. You can call a rainstorm to douse flames that will set your party alight, but if you're standing in water (or if you're just "wet") and an enemy has an electric spell or arrow up their sleeve, your entire party can be electrocuted or stunned. That's just one example. You can freeze enemies solid to make them vulnerable to being shattered in addition to simply paralyzing them, lob a fireball in the middle of a poison gas cloud to set off an explosion, break open a barrel of oil to slow your enemies and then set the entire oil puddle alight where they stand... it's an incredibly versatile and rewarding system, and also an incredibly dangerous one since it can be used against you, so think before you act. Battles can be big, and drag on a long time, so don't be afraid to use magic or other abilities to escape from combat if you're outnumbered. 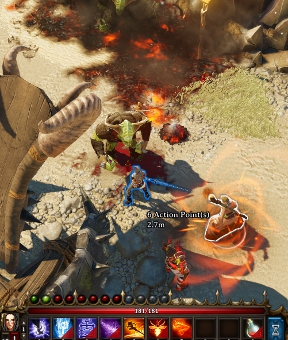 A lot of people have been comparing Divinity: Original Sin to Baldur's Gate, which is a pretty brassy comparison to make given the indomitable reputation of that series. Original Sin doesn't quite measure up in terms of character or plot complexity, and the less said about its silly rock-paper-scissors minigame the better, but its strategic, challenging turn-based combat and enormous world brimming with surprises that won't hold your hand is going to be a breath of fresh air for Baldur's Gate fans. Original Sin will always give you an objective (solve this murder, find this thing), but rarely any clue how to go about doing so. You have to do the legwork yourself... ask around, look for clues, and follow any leads you're given. For the most part, it's incredibly satisfying to feel like the game isn't leading you around by the nose. The first time your hunch about someone turns out to be right because you stumbled across a well-hidden secret switch in their home you'll get a little giddy, and you'll agonize over whether you're making the right choice in a bad situation, or if you could find another solution you just haven't seen. Conversely, however, some of the minimal directions offered by NPCs or your journal are almost too vague, and you can spend a long time wandering around in ever widening circles because "I saw this thing North of town" could mean ten steps outside the gates, or two boss battles, a bunch of side-quests, and all the way on the other side of the region map and slightly to the right. Also like Baldur's Gate, if both your main heroes die in battle, it's Game Over, man, no matter how many Resurrection scrolls the rest of your party is carrying. 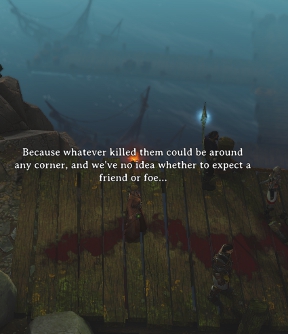 It must be said that Original Sin looks and sounds absolutely fantastic. The environments are absolute stunners, with beautiful, colour-rich detail everywhere you look. It feels lush, like a living painting, and goes a long way to make up for those corny glitter sky-high heels and cutesy heart belt the female avatar is wearing in the character creation screen. No, it's not that I don't like cute things. It's that it seems a little impractical for a warrior to be trying to balance on glittery four-inch heeled sandals while trying to stab a dragon in the face. The voice-acting is, across the board, extremely well done, from the lowliest peasant to the blusteriest arch-duke, though the ambient lines NPCs spout as you explore the area quickly become annoying. There's only so many times you can listen to a pair of unnamed sailors recycle the exact same chat over and over and over within a three minute period before you go a little crazy, so having the ability to selectively mute it would have been welcome. "Nobody has as many friends as the man with many cheeses! Nobody has as many friends as the man with many cheeses! Nobody - " Look, all I'm saying is that when the murders start years from now and all the authorities have to go on is that scrawled on the wall over and over, I expect you guys to back me up. 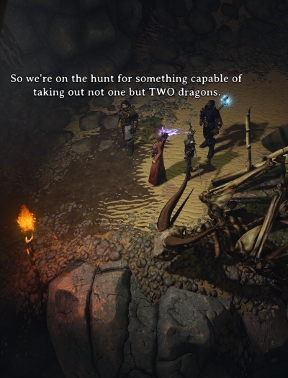 Not everything is roses. Party management feels a little clunky, especially when it comes to managing inventories when you're buying, selling, or repairing. Gold isn't shared among party members, so if someone needs their weapon repaired, you either need to send the item to whoever's packing your coin and then talk to the blacksmith, or send coin to the party member who needs the item fixed. Likewise, while being able to dump items onto vendors until their total value meets the cost of whatever you're trying to buy is awesome, because every party member's inventory is separate, you can't take items from multiple people to add to a single transaction (if you haven't given the items to one person, that is), because everyone knows in real life only a single person is ever allowed to speak to a cashier and be involved with a transaction. It's just needlessly clunky and makes you feel like you have to stop and spend too much time arranging your inventories, which interrupts the flow of adventuring. Even equipping everyone is a pain, since there's no way to check the equipment of another party member against the stats of a piece of armor someone else is holding without sending it to each person one-by-one to do so. 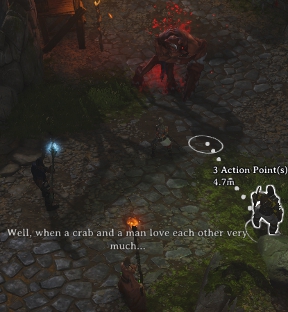 Despite this, however, the game still remains one of the best and most engaging strategic RPGs to come around in a long, long time, and is just a great game, period. Once you get into Divinity: Original Sin, it's hard to come up for air. The maps are enormous, filled with secrets and treasure that encourage exploring every inch, and as in the original game the twin teleporter stones you'll gain make travel a snap, since you can just leave one at your favourite store, and then use the other to pop back and forth between adventuring and restocking. Every bit of progress feels earned, and every battle offers challenge. It's not something you're going to get through in a weekend, and best played when you have long stretches of time to devote to it. Divinity: Original Sin was a Kickstarter success story, and considering what's been delivered and the way the developers continue to work with their community to expand and improve the game even after release, it's enough to make you believe crowdfunding isn't so bad after all.

I'm pleased to read your review; being one of the Kickstarter backers myself, I'm already committed to playing it! And a good objective opinion is always a pleasure...

Though I admit, I still haven't downloaded my copy yet (so many games, so little time!). And which source do I choose - Good Old Games, or Steam? Decisions, decisions....