Divine Divinity by Larian Studios is an action/RPG title from 2002 that I keep telling people they should play. They, in turn, tell me Divine Divinity is a silly name, and, well, okay, it sort of is. The game itself is also a little silly, but also one of the most addicting and enjoyable titles of the genre I've ever played. You wake up after a brush with death to find yourself in a village with problems; it's under siege by orcs on all sides, the local healing shrine isn't working so well anymore, and the village leader has come down with a dangerous case of insane. Not that leaving the village is any safer, since apparently you're a "Marked One", and the demonic creatures hunting you down are rather rudely uncommunicative about what that entails, but it's probably not a good thing. The rest of the vast kingdom has troubles too, and it's up to you to put everything right or die trying. Which you probably will do. At least once. Or twice. Possible a dozen or more times. All hail the hero! 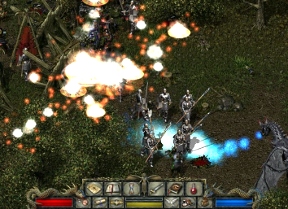 Character creation, as you'll discover, is mostly cosmetic, and really only affects your starting skills. While mages might begin with a fire spell and start off weaker than warriors, for example, there is no limitation to what skills your character can learn. Upon leveling up, you gain five points to put into your attributes like strength and agility, and a point or two to spend on "talents"; the game's version of a skill tree. You can spend these points any way you like, regardless of your class, so it's easy to create a super-powered sword-swinging mage who can throw fireballs with one hand, and pick any lock with the other.

Of course, none of this is going to do you any good if you're dead, so you should probably familiarise yourself with the controls. There are a lot of hotkeys you can set, but for the most part all you need to know is that the mouse interacts with the world, [I] opens your inventory, [C] opens your character sheet, [spacebar] pauses the game, and [ESC] opens the main menu for you to save, load, or quit. Click and hold to walk in the direction of your cursor, and move your cursor farther away to run. As for fighting, well, simply clicking once on an enemy will cause your character to attack and keep attacking with their default weapon until the enemy dies (or you die) or you put a stop to it. Right click to use whatever skill you have assigned. And if your health gets low, your stamina runs out, or your magic fails you, just quaff the expensive potion of your choice.

No money? No problem. Find an abandoned house to hole up in, or bed down in someone's barn as long as you can find a pile of hay to lay your head on. There's a surprising amount of freedom to the game, and this is what makes up for the cornier story elements. Uncover the truth behind the dwindling beggar population in a nearby town, run errands for a prince against your will, or strike off into the wilderness and spend your time hunting for treasure and picking herbs to create your own potions. As you progress, you'll begin unlocking teleportation pads that make travel quicker, and you'll also get a pair of link teleport stones; just leave one whenever you want, and then carry its twin with you to return at a click. Just don't get cocky; the world is dangerous, and it's easier than you think to get overwhelmed, so save early, and save often. 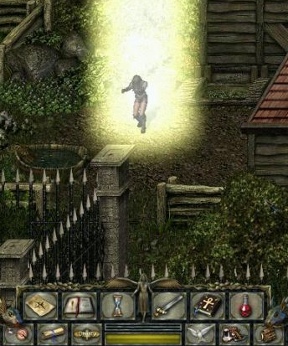 Analysis: While Divine Divinity definitely borrows its combat from the Diablo series, the game as a whole places a much bigger emphasis on story and exploration than Blizzard's title ever did. In fact, to be more accurate, Divine Divinity was Oblivion before Oblivion was Oblivion. The world is absolutely massive, and uncovering the entire map and all its hidden treasures is going to take a lot of hours. In your travels, you might find yourself hunting down an orc's magical axe, discovering a sinister wishing well, or choosing sides in a war between the wasps and the bees. The main quest is of a decent length, but there are so many side quests scattered all throughout the world that it's easy to shrug off your divine duties for days at a time, if not longer. There's troubles to solve, treasure to find, herbs to mix... and, of course, monsters. Lots and lots of monsters.

In fact, enemies aren't limited to demonic beasties or evil henchmen, since even the local wildlife seems to have collectively decided your existence cannot be tolerated. Boars, snakes, and any variety of insects will drop whatever they're doing to descend on your panicked butt and trample/sting/bite you to death. Be prepared to stuff your pockets with a ridiculous amount of healing and mana potions or spells, because however many you have, I promise you it will never, ever be enough. Save frequently, especially early on, since combat happens in real time and the game loses no sleep at all in dumping entire platoons of enemies on you whenever it feels like it. While the combat and ridiculous variety of arms and armor is part of what makes the game enjoyable, it can easily become frustrating to have to beat a hasty retreat from swarms of enemies... especially since they can and will pursue you long distances before losing interest. A lot of the dungeon crawling sequences also feel like they drag on a bit too long, leaving you feeling like a particularly pasty (thankfully unsparkly) vampire when you finally see the sun again.

Divine Divinity is not for the "serious" RPG fan, and if you go into this expecting, or demanding, a heavy emphasis on solid storytelling you're probably going to be disappointed. Despite its age and corny elements, it still remains some of the most fun I've ever had in a hack-and-slash/RPG title.

This game has been on my Mandatory Installation list for years; I've never come close to finishing it (I don't run it that often), but it's a good game to come back to for some good old-fashioned monster-bashing and side-questing.

Sorry but despite the review i must say that this game is just too hard for casual player.

Why is this review even *on* this site? Divine Divinity is a normal RPG--it's not a 'casual' game, nor is it a Flash game even in the slightest. Jay...I'm rather dissapointed in you letting your site go from what *used* to be a rather nice listing of independantly-made small games to a listing increasingly leaning toward entries that are basically nothing more than advertisements for online game-sellers. :-(

ChrisForsyth: I'm sorry you're disappointed, but I believe we're still one of the best (if not the best) review sites for independently-made small games.

In case you're unaware of our format, we review browser-based games during the week (Monday through Friday) and download games on the weekends (Friday through Sunday).

Most download games are not free, but we do publish our Weekend Download feature, each week on Saturday, highlighting the best independently made freeware games available.

Although this particular game may not fall into the category of "independently-made small games", it was selected as being a 'best in class' game from our team of reviewers, and therefore deserves a spot here. Every game we choose to review is evaluated and chosen by committee, and is therefore one we recommend.

Nobody pays us to review anything, ever. Full stop. If your opinion is to view our reviews as advertisements, that is your right. But we stand by our reviews and recommendations.

This is perhaps the most beautifully atmospheric game I've ever played. Everything fits together smoothly - the art style, music, combat. It's like Diablo 2 but with some great questing. And the game really hasn't aged.

I loved this game when I played it years ago. It's not really a "hack-and-slash" like Diablo, despite the isometric perspective, but a traditional Western RPG with sandbox elements. There is much fun to be had piling housewares and broken barrels in the middle of the street and massacring NPCs by luring giant spiders into town.
IIRC it also has a pretty awesome soundtrack.

The game was very buggy, crashed frequently, when I played it in '02. I had enough and gave up when I was around 90% through.

A tip: cast the firewall spell then just run in circles, the AI is so stupid that the monsters would walk across the firewall repeatably until they die.

I've owned this game for several years now, but never got around to playing it. Thanks for this reminder - I think I'll get it out and give it a try.