[Note: This game contains cartoon gore, with an option to disable SOME of it from the main menu.]

In tinyBuild's deceptively adorable indie puzzle game Divide by Sheep, for iPad and iPhone (with Android on the way!) as well as PC and Mac, things get dangerous when Death gets lonely. A kraken for a best friend is great, sure, but you know what? There are a lot of animals on Earth, and surely nobody would miss a few dozen of those to bring some comfort to the Grim Reaper, right? Unless you're the sheep, pigs, and wolves our skeleton friend wants to cuddle up with. Now thanks to death, the happy grasslands our woolly friends frolic in are flooding, and the incoming life rafts can only save so many! In each level, several rafts will show up, each with a specific weight limit... too many sheep and it'll sink! The problem is the sheep are all stranded on tiny islands in random groups, so you have to figure out how to combine them to get the maximum number of sheep per raft to save, or, well, how to sacrifice the ones you don't need for the greater good. Tap on an island and drag towards an adjacent land mass to move all sheep on it to where you've indicated. Each sheep needs a tile to stand on, and if there isn't one for it, well, it's into the water it goes. You need to figure out how to make best use of the available land to fill all three life rafts to maximum capacity... easier said than done, especially when hungry wolves, barbed wire, lasers, and more begin to be added to the mix! What can we say, Death is really lonely, and with 120 levels to solve across four worlds, he's also pretty persistent. And what do you think will happen when the other animals want to get out of the way of the rising water too? Or when Death gets tired of waiting? 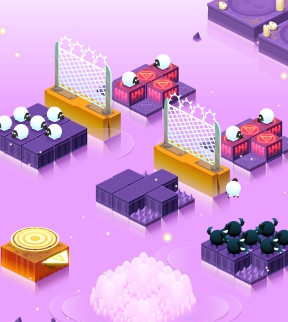 Though it may seem cuddly, Divide by Sheep is still more than a little morbid, so if the sight of fluffy cartoon lambs being devoured or sliced by lasers appalls you, you may need to look elsewhere to get your fix of logic puzzles. For the rest of us, however, Divide by Sheep is a charmingly macabre game that knows how to make simple gameplay smart. By and large, most of the game's rules are left to you to figure out as you play... you can move wolves from island to island too, for example, but a wolf who has eaten a sheep is too laden with mutton to jump, making him no longer a threat, but no longer able to move or escape either. It adds more than enough new gameplay elements to keep you hooked throughout, and knows how to combine just a few of them in levels to make you think, rather than squeezing in everything it can. The stages are tightly designed in a way that encourages you to relax and mull them over, though because there are so many of them and they play so similarly, you may not be able to get through it in one sitting, though the ability to skip a level you've successfully filled at least one raft in is a nice touch. Even with the wolves gobbling down hapless sheep, things don't start to get really morbid until the lasers are introduced... disturbing to figure out how to use a sheep that's been sliced in half to make your quota? Sure, but it's also pretty clever. Though while the game does offer an option to disable some gore, all it really does is get rid of the blood left behind when you're flopping the cleaved sheep halves around, not the cartoonish view of their halved skeletons and organs, so caveat emptor if that's an issue. Divide by Sheep's brilliant, bright visuals are a treat no matter what, and it's witty, weird, and ghoulish in all the right ways, making it the perfect recommendation for math fans who are a little... off in all the best possible ways.