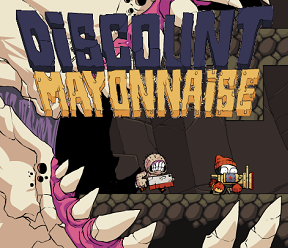 Discount Mayonnaise, an action platformer by Joelasticot and UltraPitchfork, is one of those games that blurs the line between genre tribute and satire. Of course, part of the confusion stems from how the genre, ultra-macho run-and-gun shooting, was kind of a parody of itself to begin with. So, while you'll see all the hallmarks: tons of enemies to blast into chunks, cool weapons to fire (including Bill and Lance's favorite, the spread-shot), and power-ups of all kinds to grab, you'll do it all while being chased by an all-consuming sandworm and upgrading your trucker hat for better defense. The art style is a strange mix of Jhonen Vasquez and Salad Fingers, and is so exquisitely ghoulish that it almost makes up for the stickiness of the controls. Strange as it is to say, this is exactly what you'd think a game called Discount Mayonnaise would be.

I really can't say anything about this game that wasn't already covered in the review. Anyone who's seen Vasquez's work (especially the BAC) will see the influence here.

Great gameplay, great graphics, funny, this is the game of the year for me :)

What the heck do you do you at the end of level 22?

This was an excellent game, but very challenging. Don't worry about the coins your first time through the levels; you get some items later that make most of the levels much easier, and a few coins simply can't be collected on the first go.