Ever wanted your own zoo but were concerned it didn't have enough swanky funk style? NimbleBit, the creators of Pocket Planes, along with Milkbag Games (featuring Matt Rix of Trainyard fame) know that feeling all too well. Disco Zoo is a casual puzzle and simulation game that combines simple logic diversions with too-cute visuals that's perfect for mobile devices. Pick up and play, put it down and party. 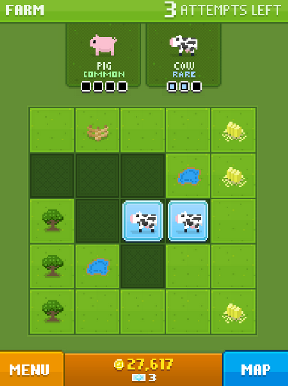 Disco Zoo sends you out to rescue animals to keep safe behind your zoo's walls. You do this by playing a battleship-style game that takes place on a 5x5 grid. Tap a tile to reveal what's hidden beneath it. Usually it's a few coins or a whole lot of nothing, but there are animals under the grid pieces, too. They're arranged in unique patterns sort of like battleships. Uncover them all and you can add the animal to your zoo, which is good, because keeping cute furries is how you make money!

What keeps you coming back to Disco Zoo is the waking/sleeping feature. Animals take naps on a set schedule, and they won't wake up unless you tell them to. Sleeping animals aren't great for business, so you'll want to pop back as often as you can to maximize profits. Lots of animals sleeping at once? Try throwing a DISCO PARTY! Yeah, you'll like it. Everybody does.

The combination of quick animal rescuing scenes along with the simple zoo management sections is definitely a winning combination. Disco Zoo features coins and bux as currencies that are refillable via in-app purchase, but both are stabilized well enough to never make you feel forced to spend real world cash. It's a well-balanced and wholly addictive game, just right for your inner zookeeper/disco club owner!

You can disable those in the game's options menu. I did. :-)