Dirt of the Dead 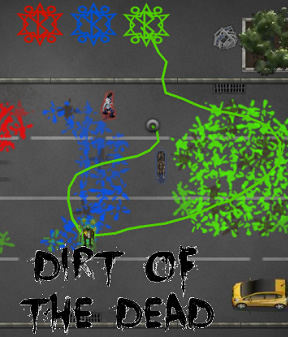 Certainly we know about the immediate dangers of the undead: the biting and the clawing and the infecting and the whatnot. What about the larger environmental concerns? I mean, a zombie claws his way out of a shallow grave... who's going to be re-sodding that ground? A vampire explodes in a fiery cloud of dust... someone needs to sweep that up. And don't even get me started on what can happen when a werewolf gets in your flower bed. 3kggames's new action looper Dirt of the Dead shows that the clean-up can get just as intense as the confrontation.

In each level, you are presented with monsters and the dirt they have left behind. The idea is to clear both from the screen, along with any other dirt created. There are a number of runes on the screen, colored to clear a specific color of dirt and a specific category of monster: green for zombies, red for vampires and blue for werewolves. Using the [mouse], you click a rune, drag it to create a rune trail, drag through at least one monster to activate it, circle around the dirt you wish to clear, then complete the loop. Make sure no uncaptured objects are in the loop, or else it won't activate. If you capture five monsters or more in a single loop, one of four bonuses is activated including ones that remove the top layer of dirt, activate a "deep cleaning" mode, kill all monsters on the screen, or freeze them for easy capture. Once all the infected dirt and monsters are gone, you move on to the next level. There are 20 levels to clear, with new creatures introduced as time goes on. Now, let's go for a clean sweep! 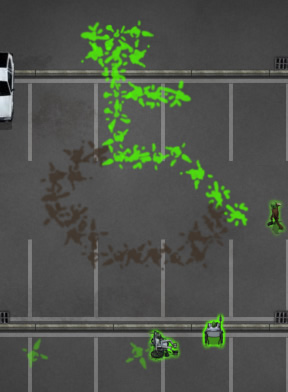 Analysis: While Dirt of the Dead might be the first casual game dedicated to the odd combination of landscaping and necromancy (...okay, maybe the second), the innovative gameplay, expertly animated enemies and impish soundtrack make it a joy to play. I was always surprised that after Loop demonstrated how engaging a lasso mechanic can be, that no other online game really tried to build on its mechanics. The mouse was made for this kind of control scheme, and, in Dirt of the Dead, it pays off. It is supremely satisfying to plot a twisty circle that knocks out five zombies while clearing a huge swath of infected land. Sure, the obstacles on the landscape can lead to difficulty in clearing a last little bit of land, new enemies always seem to pop up to ruin an expertly-plotted loop, and there were more than few times that I kept trying to intersect the wrong baddie with the wrong color, but the originality of Dirt of the Dead's core is evident throughout.

However, while Dirt of the Dead's core is original, many of its surface elements are less so. I kinda felt that the zombies and vampires weren't really integrated to the game's concept. They don't really make the game scarier. They aren't really played for laughs (though some of the level designs are secretly hilarious). They're just... there. Were they included so as to appeal to an internet that's not quite undead-fatigued? Is there really a reason why Dirt of the Dead couldn't have been about a farmer trying to prevent his fields being wrecked by cartoony bunnies? Are werewolves actually known for kicking up clods of blue dirt? As it stands, I fear that the game might be dismissed by those looking for more horror, and avoided by those looking for something less eerie.

If so, that would be a deep shame, since Dirt of the Dead plays so well. There's no real goal beyond completing the levels and beating the expert times, but really, there doesn't need to be: Dirt of the Dead is a demonstration that even the simplest tweaks to a control scheme can open up untold genre possibilities. Now, if you excuse me, I need to make sure Frankenstein isn't messing up my azaleas again.

Play Dirt of the Dead

And don't even get me started on what can happen when a werewolf gets in your flower bed.

...I just thought about that sentence a little too much.

It's a great concept, but seriously flawed. The creatures will respawn right on top of obstacles, leave their "dirt" so close to the obstacles I had flashbacks to playing "Operation" while intoxicated -for money :( and the generic dirt markers are so faint as to be invisible.

The mouse avoidance component is too strong for me here -- my cursor keeps flying into parked cars and things, destroying my loops. But the idea is neat.

Played for a while, but the concept, and the gameplay, got old fast.

This is really fun, but I'm stumped on level 17. The monsters cross over and after they do I have no idea how to clean up.

To D.R.: while dragging the line - you can actually draw outside the screen to avoid the obstacles

Yeah, Level 19 (the level with the three separate lanes) is broken. If you want to play Level 20, remember the pause menu lets you skip a level.

Ah, thanks. I finished it somehow, though...I restarted the level again and again until the glitch didn't surface. Painful, but I felt good when the level was all clean.

The zombie doing the macarena at the end is priceless!