Don't let it fool you... behind its cuddly wuddly exterior and bumbling sweetness, JWolfGames' platformer Dino Shift 2 has some teeth... clever girl. Oh, it's not that there's anything sinister happening, it's that it has difficulty that slowly creeps up on you. Like the original, you play a pudgy dino who moves and jumps with the [arrow] keys, jumping higher and farther the longer the [arrow] is pressed, and who has a hunger for blocks. Your goal is to devour a certain number of blocks on each stage, but the catch is that you can only chow down on the ones that match your colour, which you can swap from green, blue, and red with [Z], [X], and [C] respectively. Stuffing your face isn't going to be that simple, however, with objects and obstacles you can only interact with when you're the proper colour, which can take some careful timing, and even enemies that will become dangerous to you when you match their hue! 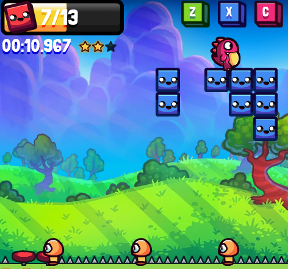 There are a lot of little changes here from the first game, from the way the colours are bound to different keys to the way the dino controls feel more responsive and the design even more colourful, but for many people the most glaring will be the timed scoring system, which doles out between one to three stars depending on how fast you complete a level. While you can ignore it, it is a little obnoxious with the way an unseen audience loudly groans if you don't perform well, though it does at least add another layer of challenge for those who wish it. Not that it necessarily needs it, since Dino Shift 2 is both more complex in level design, but also more action-oriented. You'll need to be a lot quicker and more accurate in this installment, and some of those jumps and the timing restrictions are really precise. It's actually something I enjoyed, since each stage felt like a unique and carefully designed challenge, but it's also something that might throw more casual platform fans off. Still, Dino Shift 2 is an absolutely gorgeous and well designed little game with a bit of bite that might make you rage quit temporarily... but at least you'll do it with a smile!

It's annoying how it automatically goes to the next level. If you want to try for all three stars you have to keep going back to the levels screen.
Also, he does NOT seem to jump higher the longer you hold the up button. Unless I'm doing something wrong, he only has a single jump level.

Again, either listen to the massively annoying music or play in complete silence. No ability to turn off the music but leave the FX. WHY? OH WHY? I just do not understand. And I do not understand why there isn't more outrage about it. Do people really not mind playing with that terrible music? Or do they not find that FX contribute to the experience? Can someone explain?

It's a major PITA that game developers still think all keyboards in this world were QWERTY.

yeah, carbunk is right, automatically progressing to the next level is really annoying when you have a reason to replay levels, such as getting more stars. you can't even hit R during the transition, and it just makes the process of retrying levels much more annoying than it should be.

Yo! Artist (and designer) of Dino Shift 2 here. Thanks for plugging us, but I wanna point out that fuzzymintgames was not involved in the creation of this game in any regard. The programmer of this game is JWolfGames.

Fixed, and I do apologize! I couldn't find any credits and assumed the developer was the same as the original. :)

Hey guys, programmer here. Just wanted to let you all know that I've emailed Dora with an updated version of the game that addresses the issues you all were having. Mainly adding the ability to retry levels during the star reward interface instead of it automatically advancing to the next level.

For those that are having trouble on AZERTY or QWERTZ keyboards, there are completely customizable controls in the Settings. You can access it by going back to the main menu of the game. We do realize (obviously) that QWERTY keyboards are not the only keyboards, hence why I add control configs to all my games! We only default it to QWERTY!

The latest version has been updated thanks to Justin!

Hi Justin, thanks for being so responsive! It's great! Can you help me understand why programmers don't always include separate control over music and FX? It can't be difficult, right? (I don't know anything about these things.)

Jeemeyel, it's definitely not hard to have separately controlled music and sound effects. In fact, prior to the current update of Dino Shift 2, the music and sound had their own volume variables but there was only one button to control a global mute. The original reason we didn't include separate audio controls for sounds and music is because the HUD itself was already quite cluttered and fitting a new music icon in there was going to make it even more so. Needless to say, we added the ability to control the music separately anyways in the latest update!