Aww, poor little armadillo. Too heavy to fly because of that thick armor on your back? Don't worry, you're great at rolling, and we're sure that if you get enough speed going, you can jump really really high, which is pretty similar to flying. In a way. The mobile release of the browser game of the same name, Dillo Hills is a charming and rather engrossing game of quick reflexes and gradual mastery! 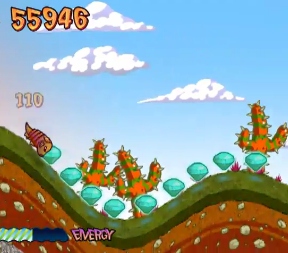 Just like the iOS game Tiny Wings (and other similar titles), your only concern in Dillo Hills is dealing with when to tap the screen to gain speed and when to let go and watch the 'dillo fly. Tap and hold to dive, ideally only pulling off this move when you're headed towards a downward slope. Release to gather momentum and shoot yourself farther and higher, making our armadillo friend happier by the second.

After traveling a certain distance, you'll move to new zones, getting more birds to run into and more gems to collect. The hills also get trickier, bumping up the challenge as you play. The best part about Dillo Hills is the wealth of unlockables, ranging from ability upgrades to increasing your drop speed, lowering damage you take, new hats to wear, and unlocking new characters to play, such as a turtle or a penguin! There's a lot to love about this simple arcade game, making it the perfect pick-up-and-play game that will keep you coming back for more and more!