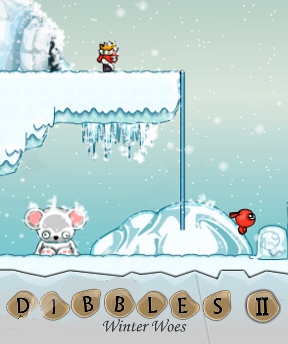 The holiday season has so many lessons to teach us. "'Tis better to give than to receive", for example. "The little people are expendable and should willingly give their lives for their betters" is another good one. What, you never heard that? Well, if you didn't learn that important moral in the original Lemmings-inspired Dibbles, The Podge is going to give you a second chance in the form of its sequel, Dibbles 2: Winter Woes. Simply place commands on a field to order the titular dibbles to create a path for their king... by killing themselves. Sound gruesome? Shhh. Look at the softly falling snow. All is right with the world. Just repeat "it's for the greater good" until it feels right.

In addition to new deaths for the hapless dibbles, the game contains some player-friendly improvements over the previous game. Perhaps most notable is the skip function, which will give you the option to skip a stage If you attempt a level several times and can't defeat it. In the level select screen, any levels you haven't actually beaten won't be checked off, but the nice thing is that this allows you to keep going and come back to a puzzle later, when you might have a fresh way of tackling it. With forty-four new levels, this is more than a simple seasonal reskin, but an enjoyable game in its own right which will satisfy fans new and old.