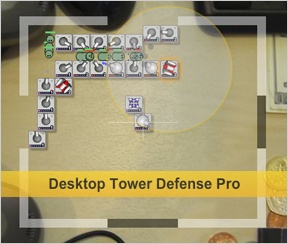 There are any number of tower defense games available nowadays (In fact, you may still be laboring under the yoke of Gemcraft Zero). But one that has stood the test of time, and one of our all-time favorites, is the classic Desktop Tower Defense.

Now Paul Preece of the Casual Collective has released yet another version of this classic time stealer. Desktop TD Pro is a substantial update to the original game, both in terms of graphics and features, while still remaining true to the reasons we continue to come back to this particular tower defense title.

For those that haven't played Desktop TD, the concept is a bit different than the majority of tower defense titles, in that the main game has no defined path for the enemy to follow. Much like When Orcs Attack, it is up to you to use your weapons to build maze-like structures that guide the enemy towards their ultimate doom. Since there is no pre-defined path, the game makes sure that there is a path through your defenses so that the enemy at least has a chance of making it to the exit. No chance of blocking them in a corner and watching them squirm.

The other unique property of Desktop TD is the artwork. The game literally takes place on an office desktop, with notepads and telephones and pens and such scattered around. Your towers are hand-drawn representations of cannons, rocket launchers, and gun turrets, bombarding the cute, hand-drawn minions bent on getting to the exit and decimating your life points.

Desktop TD Pro keeps these concepts, while adding new ones to the mix. For starters, you can now choose between five different desktop backgrounds, once they have been unlocked by playing through the scenarios. You also have a choice of tower graphics. You can stick with the tried-and-true hand-drawn look, or you can choose the more modern-looking rendered towers. The graphics do not change the gameplay in any way, but it does suggest that further updates to the game may include new graphic sets. 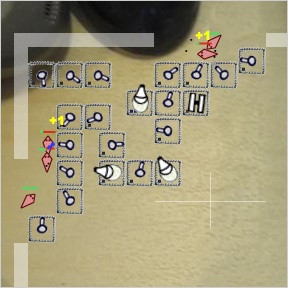 Also new to the series are a number of gameplay options. Scenarios are basically an extended tutorial, slowly introducing the player to the different enemies and towers in the game. Sandbox is the basic game, but this time around you have control over many aspects of the game, from the difficulty of the enemies, to how often waves appear, to what towers are available and what you can do with them. And, once you register with the Casual Collective, you can save your game settings for the future.

Next are the Sprint Modes, where you can challenge yourself not only to survive through all of the waves, but to complete them as quickly as possible. Because of this, waves will only come one at a time, no matter how long it takes to defeat them. But once a wave is defeated, the next will start immediately, leaving you little time for building or upgrading your towers.

The last mode is the online mode. This allows you to compete in online matches against other players. Unfortunately, with the relative newness of the game, I was unable to find a game to join to test this particular option. Once people start playing the game more regularly, this mode will no doubt become more popular.

Analysis: Desktop TD Pro's new game modes really add to its shelf life. The Scenarios in particular are excellent, allowing new players to work into the full game slowly. Some of them are truly challenging, making them must-plays even for tower defense veterans.

Another fine addition to the game, the Sprint Modes will keep you on your toes. They are as much about finding the right strategy to survive as they are about making on-the-fly decisions about tower placement and upgrades. With no space for planning between waves, you will find yourself scrambling to make your changes, trying to anticipate the needs of the next wave while not completely ignoring the current one. I've only been able to beat a couple, and my times were not that impressive. Since the scenarios play out the same each time, you can use trial-and-error to hone your tower strategy.

A strong contender for Best Tower Defense Game Ever, Desktop TD Pro is definitely one that you should take a look at. Even if you think that your tower defense skills are sorely lacking, Desktop TD Pro gives you the tools to improve your game and defeat the onslaught of baddies coming around the corner.

NOOOOOOOOOO! I have finals this week!

Argh! Cannot get through level 13!

Naturally, the instant I post that, I get it:

Four pellet towers in the centre, in an open square, one tower's width apart. Upgrade each tower twice (leaving you with $0). Should kill the first wave.

Then just keep upgrading the towers, concentrating on pairs of opposite corners.

As someone who loved the original, and played it far too much, I found the *VERY* disappointing. Nothing much new here: same enemies, same towers, same concept.

lot of work on flashy looks with no added function, and a mix-and-match game mode interface that is locked unless you sign up.

innovate and you will get my interest again.

I have heard rumors that a DS verson of desktop tower defence is coming out on May 11. Neat-o.

#23: How to beat? I've got all the others done. Bash towers? Dart towers? Boost towers?

Huh. I remember that I beat Scenario 23 before they reset the game the first time, but I can't quite remember how. I know it involved

setting it up so that each half had to loop around one short side of the triangle and the entire long side.

Other than that, I have been trying tower combos and failing. The hard part is where

they start taking two break-ups to kill, at about level 22. Haven't gotten beyond that, I am sure it requires some combination of mass-destruction towers and possibly health towers. And multiple destruction areas.

im stuck on this level

Note that by selling the highlighted tower and building a new one in the space to its left, you're changing the path to the exits, and this causes all the creeps to turn around and take another lap of the board. (And when they get close to the new exit, you just switch it back.)

Once you get a feel for this scheme, the creeps won't have a chance. :)

Huh. That's pretty sharp, but I managed to get through lvl 22 just by --

putting four squirts in the middle, and more or less evenly upgrading them.

Ok, now that I've played it a while, I'd say that overall, this is fun, but it's more like having a few more scenarios than anything really groundbreaking. It's just more Desktop Tower Defense 1.5 But one can't complain too much about that, because 1.5 is a terrific game.

Haven't had a chance to do multiplayer yet, looking forward to that.

Level 23 scenario is very easy. All you have to do is juggle.

can someone help me pass level 25 in pro? thanks!!

lvl 25, as soon as starting, blow up EVERYTHING except for the level 5 and 6 ones and try to take out the first 6 waves with them, then just start making your maze and you'll be fine, only the last wave needs juggling although if you didn't lose any lives at the beginning, you should be fine

For scenario 25, before the wave starts, spend all ur money upgrading the towers in the centre. Then hold 'n' to send out ALL waves, then splat them all together. Looks crazy, but it works. I made it out with 1 life. lol.