[Desktop Dungeons is now available for iPad and Android tablets! Skip to the end of the review to see the portion about the iPad port.]

Originally featured as freeware in 2010, QCFDesign's indie roguelike Desktop Dungeons can occasionally feel like it's holding you down and making you slap yourself in the face, laughing, "Stop hitting yourself! Stop hitting yourself!" I know that sounds like a strange endorsement, but, well, it's true. Part turn-based RPG strategy, part resource management simulation, and part puzzle, it's a deliberately difficult game with a sense of humour about everything, especially when it comes to killing you as often as possible. 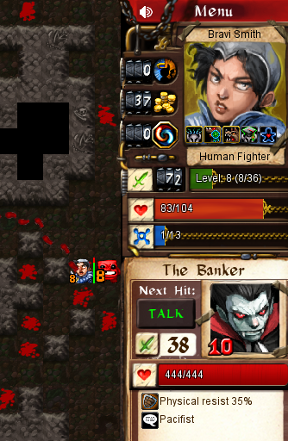 It's like this. The main game is a series of maps where you'll be tasked with a specific objective. You'll pick your hero and class, and start at level one. (Heroes do not carry over between stages.) Each scenario is, ideally, only around ten to twenty minutes long and designed for coffee-break type play. You just click around to move and on enemies to attack. Don't worry, a monster will usually only attack you when you strike them. As icky as it sounds, you regain health (and mana!) by picking up blood from defeating (most) enemies and uncovering new territory, and as you level up, you'll get stronger. Throughout the dungeon, you'll find helpful things like squares that permanently increase your stats, better equipment, and even spells. What's more, by dragging items to the Conversion bar, which acts as a sort of offering to the Gods, you'll be granted Conversion Points that count towards conferring you various bonuses.

Completing a map grants sweet, sweet loot based on the treasure you found, which is, in turn, spent on your kingdom. Oh, didn't I say? You have a kingdom. Well, eventually. At the start of the game, you take control of a group of bruised and battered humans who are the only remaining survivors of an attack on their caravan, and are asked, over the course of the game, building your tiny settlement into a thriving kingdom. Spending gold on new structures and defenses in turn unlocks more quests (maps), and, as you go, new hero races and classes to play as. You'll even eventually be able to take bonus items into dungeons with you... for a fee, of course. 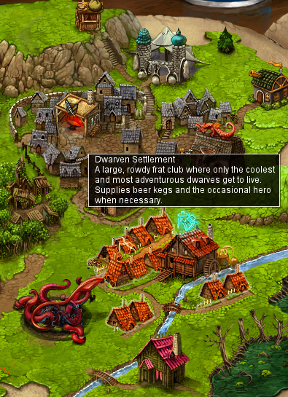 As you'd expect from a roguelike, death is permanent, and the odds are always stacked against you. When you die, you'll have to restart the entire map, and you'll find it completely randomized when you do. Additionally, once you've unlocked the Explorer's Guild, you'll gain access to puzzle dungeons, which aren't randomised and require careful thought and a specific strategy/solution to defeat. Complete all puzzles in a pack, and you'll win valuable rewards, but perhaps more importantly, also learn a lot of tips and tricks you might not pick up on your own that can be helpful during harder dungeons. Oh, and don't worry about running out of maps... with the random adventure feature, you can happily quest forever and ever.

Analysis: A lot, even most, of roguelikes are hard, but not all of them are smart, and Desktop Dungeons is definitely both. Though the game still randomises its dungeons and enemies, it still feels like everything is being left up to you. Even if you're not playing a puzzle stage, the way regeneration is handled forces you to think strategically and pick your battles and your bath instead of blindly swinging and hoping for the best... though that will definitely happen from time to time too. By not allowing heroes to carry over between maps, you're always forced to start fresh with each challenge, and since certain maps and challenges can only be completed by specific classes or races, you never really get too "stuck" on a particular hero type you feel comfortable with. All of the possible classes and races have their own benefits and feel useful for a variety of situations, making them worth experimenting with. Each time you think you've found everything, you'll unlock another race, another class, more spells, gods to worship... and all of them have their place and are useful. 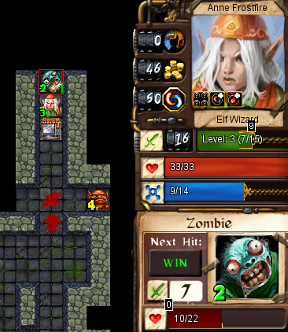 It's an accessible game, and yet there's a remarkable amount of depth to everything from the way spells can be used, to the way you can gain extra experience points, and so on. Playing through the puzzle stages to learn what's under the hood is essential. The engaging charm that comes from the writing and visual style will entice more people to give it a shot, it's still a very challenging game from the get-go. It's extremely easy to paint yourself into a corner in a dungeon, so to speak, and wind up against impossible odds. This can be particularly painful if you make a stupid decision by accident, say, using a health potion when you didn't mean to, or clicking the significantly powerful monster instead of the much weaker one beside it, since there's no undo button. That being said, Desktop Dungeons always feels like victory is within your grasp if you just think creatively enough, rather than just being about who's carrying the bigger stick.

Now available on Android tablets and iPad as of May 2015, Desktop Dungeons feels like a natural fit for mobile devices given its short yet "just ten more games" playstyle, and indeed it looks and runs great on the iPad Air. The downside is that the controls don't feel quite as optimized as they should... why can't you just double-tap an enemy to attack, for instance, instead of having to tap them, then the attack icon down by their portrait? If you do decide to set up a free account with the game, however, you can actually play it on multiple platforms using the same save... provided you own it on other platforms, of course. The mobile version already comes loaded with the free enhanced version and all the extra content that brings, and at a reduced price of $10.00USD compared to $14.00USD for the download, it's still a great addition to your mobile library despite needing some shoring up in places mechanically as of this writing.

Desktop Dungeons is one of those games I bought for myself initially without even planning to review it. It's not that I didn't think it would deserve one, it's that normally I look at every game I see with a potential review as the end goal, and this was the first in a long time I had simply looked at and thought, "Gotta get me some of that." Though the maps are designed to be small and quick, if Desktop Dungeons gets its hooks into you, there is no way in Hades you're putting this down after ten minutes. If you enjoy planning and the constant threat of death, Desktop Dungeons is probably for you. And even if that doesn't sound like fun, well... give it a try. (Though the freeware Beta version is drastically different from the finished product.) You might be surprised. Highly recommended.

I love this game. I've been following its development since the Alpha, and I'm a huge fan of games with a sense of humour.