Depths of Boatmurdered is a free indie, horror game that it a lot like a Zelda dungeon with its push puzzles and somewhat maze like layout. Only in this dungeon, there are plenty of creepy things that want to remove your face, and there isn't a master sword to save you. Steve Hayden's creepy adventure starts off with our bearded hero lost, alone, and confused. His first reasonable goal is to find shelter, but then continues to advance forward exploring the depths of darkness with nothing but his trusty lantern he found along the way. He still stays lost, but finds out rather quickly, that he's not alone anymore. The few items you can pick up are used with the [Z] button and the weapon you finally find is used with [X], but it doesn't kill the beasts. Swinging your lantern with [Z] on fire pits will cast some more light in the area, but you'll find these demons from below aren't scared of a little light. This game can also be controlled with a Xbox controller so there are two ways to lose yourself to this terrifying tale of survival. 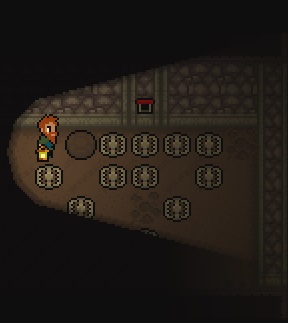 Depths of Boatmurdered is loosely based off of Dwarf Fortress Let's Play 'Boatmurdered'", but really this game should just stand by itself because it obviously can manage it... a fact you'll agree with once you've played it. There isn't much of a story in the beginning, but in the latter portion of the game you get slammed in the face with one, in the best way possible. The only present goal you have in mind initially is moving forward, and then when the creatures show, it's getting out of there as soon as you can. There are plenty of monsters to run from... just when you think you've seen them all a new type appears. When you finally get a weapon, the game doesn't become full action, as the shots only stun and you have a very limited number. Since you have to stop moving to fire and reload, using it may just lead you to your death as well. There is a bit of a change at the end where the survival horror turns into a boss battle, but as you discover the story and what is really going on, it doesn't make the game feel disjointed.

One of the oddly disconcerting things in the game is that nothing has a description. In fact, after the introduction, there isn't another bit of dialog until over an hour in. It leaves you feeling alone and each room feels much larger and much more empty than it would first appear to be. Your lantern never lights enough behind you, but through the powers of top down gaming, it lights up areas through solid walls. This can lead you to see the first monster before it's much of a threat, which might be good or bad depending on your point of view, but getting a chance to know where they are before they know where you are is always beneficial... especially since you can't run. Maybe because you have such short legs? Your inability to run can be a little baffling as you can leap over holes, off of ledges, climb up certain cliffs, and so forth. Depths of Boatmurdered isn't what you'd usually expect from an RPGmaker horror game, but in all the best way possible. Before you venture in though, keep that light burning bright. There are too many things waiting for you in the dark.

I am having problems opening the downloaded file, I extract it and it just says it can not open because important files are missing and to contact the developer...am I missing something? I am intrigued and would like to play this game. (windows 8.1)

Make sure you have extracted all the files. The game is in a file within a file, within the main file. The icon is his face. I think there is also a separate installer to install some needed software, but I can't remember if that was for this game or another. I tend to download a bunch at a time.

Sorry if this wasn't much help, but let us know if it does or doesn't.