What's that? You built a super-powered sentient mechanical monstrosity with no weak points? I just don't know what went wrong. In Artogon Games' hidden-object adventure Depths of Betrayal, you receive a letter from your old friend and professional bad-idea-maker Professor Morgan, who wants your help in his experiments to create "perfect artificial intelligence". You arrive at the train station just in time to see the very train you were supposed to board crash rather spectacularly, and an enormous metal construct carrying off an unconscious man. Things get even grimmer when you discover a familiar photograph with a number of faces crossed out left at the scene. Will you be able to stop the beast before it's too late? Is your friend still alive? And really, when has building unstoppable mechanical giants with wills of their own ever been a good idea?! 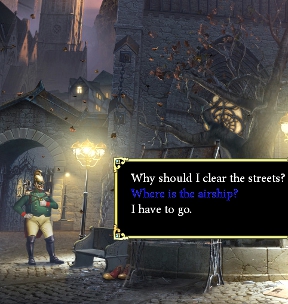 Depths of Betrayal is at its core hidden-object game, but approaches the gameplay in a markedly different fashion from most other titles. Each area will have a number of places that, when clicked, will pop up with a radial menu of items you'll need to find nearby. Objects in the menu with a red outline are items that need to be "created" somehow, such as by combining a stamp with an envelope or Garfield with lasagna. Track down each object, plunk them in the menu, and bask in the glow of accomplishing a simple task with a random assortment of completely unrelated items! The cursor changes to show interactive areas, things to look at, and people to talk to as you move it around. A good chunk of the puzzles you'll encounter will show up as sneakily locked box mechanisms in your inventory, marked by a decorative border; just click on them to get a close-up view to tinker.

Analysis: With big animated cutscenes, quality voice acting, and a heavy emphasis on its steampunk-ish plot, Depths of Betrayal is a remarkably cinematic game. It's a refreshing change from games that make you feel like you're just clicking through a series of static images... which, well, you are, basically, but they could still put a little effort into trying to get you engrossed. While the first area you'll encounter is relatively bland, the further you go the more the game opens up with some absolutely stunning and dynamic environments. It really is one of those games that grabs you more as you play, sprinkling bits of secrets and plot developments around just when you think you know exactly what's going on to make you go hmmmmm. You'll traipse all over a suspicious city, a suspicious jail, even a suspicious castle owned by a suspicious alchemist... suspiciously! It's all a surprising amount of fun, and feels like the sort of thing that would have been great as a movie starring Robert Downey Jr, Willem Dafoe, and... Jack Black as the mechanical giant. Look, shut up alright, Jack Black is awesome. 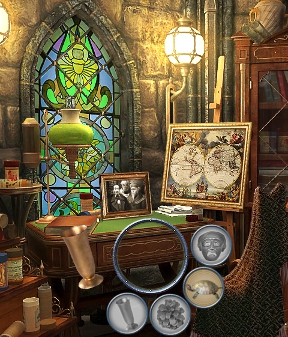 The lack of more traditional hidden-object hunting makes this one feel strange at first, but what it actually means is the game feels, as a whole, less restrictive even though it's just as linear as any other title. Of course, at the same time it can be intensely frustrating to be staring at an object you should be able to just pick up, but can't until you've gathered a bunch of arbitrary, unrelated things. It's still weird to use a cookie, a pumpkin, and a bunch of nails to be granted access to looking in a basket, but it beats staring at a stagnant messy scene with a list for a long time. Because of this, Depths of Betrayal actually winds up feeling like an adventure game, though it does take a while to get rolling.On the downside, none of the actual gameplay feels particularly unique. The puzzles will likely be pretty familiar to you, and while the carefully structured play and helpful hint/skip buttons mean you won't ever get stuck, there also isn't much of a challenge to speak of. However, It's a fantastic choice for people who want to go on a big, adventurous mystery with a geriatric protagonist who spends all day thinking up complicated, humorous ways to express his shock in the most elaborate manner possible.

At around four hours or so, it isn't the longest game on the market, and the gameplay, while refreshingly different from other hidden-object games, might also be a bit too different for die-hard fans of the original item list scavenger hunt style. But if you give it a chance to flex its mechanical muscles, Depth of Betrayal is a surprisingly engrossing story-based adventure that's well worth checking out. Give the demo a try and see if you prefer to wait for the Standard Edition, which isn't yet available at the time of this writing, but just remember; the last thing a world needs is another hyper-intelligent super robot running around. Seriously, I think Sarah McLachlan just did another commercial about them shot to sad guitar music. Stop building them.

Getting Into the Passenger Car

Getting the Golden Key

Reaching the Next Chapter

Getting into the Living Room

Getting to the Next Chapter

Getting to the Hallway

Getting to the Rooftop

Getting to the Elevator Room

Getting to the Furnace

Getting to the City Elevator

Getting the Punch Card

Getting the Spin Handle

Getting into the Secret Room

Getting to the Lounge

Getting the Can Opener

Getting the Empty Tank

Reaching the Other Side of the Castle

Getting the Second Punch Card

Getting into the Sewer

Getting to the Tower Staircase

Going to the Lab

Getting to the Tower Study

Getting into the Observatory

Getting Into the Passenger Car

Getting the Golden Key

Reaching the Next Chapter

Getting into the Living Room

Getting to the Next Chapter

Getting to the Hallway

Getting to the Rooftop

Getting to the Elevator Room

Getting to the Furnace

Getting to the City Elevator

Getting the Punch Card

Getting the Spin Handle

Getting into the Secret Room

Getting to the Lounge

Getting the Can Opener

Getting the Empty Tank

Reaching the Other Side of the Castle

Getting the Second Punch Card

Getting into the Sewer

Getting to the Tower Staircase

Going to the Lab

Getting to the Tower Study

Getting into the Observatory

Unfortunately I can't even go beyond Getting the Golden Key as I am not able to pick up the button. Very frustrating as I do not understand why that would be the case. I have restarted the game and stop at the same early stage section.