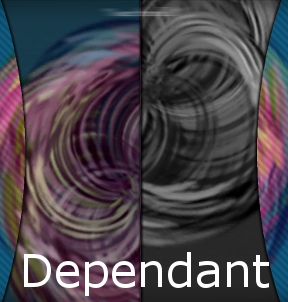 [Please note that if you are colour-blind you may have difficulty playing this game.] Chances are, if you're reading this, you're a person. And if you are a person, you've been stressed out at some point in your life. Maybe it was something simple like someone cutting you off in traffic so you missed a green light, or sitting behind you on the bus lightly kicking the back of your seat over and over. Or maybe you're stuck in Allie Brosh's patented "sneaky hate spiral". (Man, forget birds anyway. You're better than them!) In any case, my point is, we can all use a little relaxing yoga for the brain from time to time, and if this is one of those times for you, then you might want to give Fernando Ramallo's mellow and melodic simple puzzle game a try, Dependant.

Have mouse? Can play! Trackpad users also won't find much issue here, since the core mechanic is just click'n'drag. The goal is to rotate or slide the gray chunks of the screen around until they flash and snap into focus, creating one complete image. The closer you get to the proper position, the more colourful and clearer the portion of screen you're working with becomes. While the game starts you out easy, as you deal with just one or two movable portions of picture, soon you're moving multiple "frames" of the same mobile picture at the same time. There's no limit to how many tries it takes to you click and shuffle the level around, but if you want a good score and for the game to compliment you, you'll have to try to limit your moves to the level's par number... easier said than done. If you're well and truly stuck, you can click the "Pause" button to skip the level you're on, and in general you'll find that beating one level usually unlocks several more. 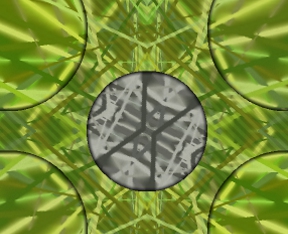 Analysis: What you wouldn't call Dependant is particularly challenging, unless you were actually trying to get each level under par. While figuring out what to rotate or slide when and how much can be difficult, to the point where I occasionally felt like calling shenanigans on the par score, Dependant wants you to play at your own place. That lack of pressure is part of what makes the game so appealing; there's no time limit, and you can fiddle and shift pieces to your heart's content, letting the softly undulating visuals, rich colours, and mellow soundtrack soothe your mind. In this regard, Dependant is somewhat of a one trick pony; a very lovely pony, who I would name Buttercup and brush her mane every day in a field of sunflowers, but one trick nonetheless. Whether this is a flaw for you depends largely on how much variety you demand on your plate at any given time.

To be fair, Dependant does go a long way to taking its simple concept and polishing it to an appealing shine. While some of the levels seem particularly fiddly, the ability to skip some of them and even play a lot of the levels in whatever order you like makes the whole thing extremely accessible. If you'll permit me a moment of girl here, I will say that I might have preferred brighter colours in some stages, or simply a wider variety of them, since in a few cases the colour scheme begins to look a bit like vintage mod wallpaper, I still enjoyed the time I spent with it. You don't always need to create something deep or complex to create something worthwhile, and if what you've been wanting is the beautiful but simple product of interactive art and light puzzle gameplay, then Dependant will provide.

We're mirroring the game here: https://jayisgames.com/games/dependant/ for those who can't play it at the sponsor's site due to browser issues.

If you're already too mellow to play a Zen game such as this, worry not: a good source of stress is waiting for the darn game to load. *sigh*

[I've mirrored the game here: https://jayisgames.com/games/dependant/ for those who can't play it at the sponsor's site due to browser issues. -Jay]

I truly have no idea how they figured their "par" -- but it's sort of mesmerizing to slide the panels around.

Please consider making a donation to the Red Cross for aid to the folks in Japan who have lost so much, endured such tragedy and hardship, and have so much more to endure...So many of our favorite game designers are Japanese, and it hurts to see so much misery and so few ways to offer any sort of help.

I haven't finished it, but I have noticed that if you get par scores or below, you get a little message with each solved puzzle. These are a little disturbing, but fit with the title well, including:

and so on. It looks like there is a bit of a dark edge to this game, so I guess it's not entirely a day in a field of sunflowers...

On the host site AND on the JIG mirrored version, I can't get past the initial colored loading screen. The opaque bar only gets through the first half of "loading" and then it stops. The game won't load any further.

Also, I'm having problems logging in. I had to go and reset my password and j.i.g. STILL won't accept it!

Okay, I got my log-in to work.

I can't play the game on the host site, and the mirrored version here doesn't work either!!

Am I the only one who can't get the game to load more than halfway?

THERE we go...there is an option below the initial loading screen to skip the ads. Ignoring it yields a hung loading screen (same as playing on JIG). NOW I can play!

[I don't get the same thing you describe. The game loads fine and goes right to the main game menu without issue. What version of Flash Player are you using, and what browser? -Jay]

What I think about this game, put in a spoiler because I feel like it.

I think this game might be about drugs. What you are sliding around are his/her hallucinations, and some of the things s/he says when you get par as Argyblarg posted, may be about how s/he has an addiction to drugs and many times s/he has tried to get off them but has failed.