Department 42:
The Mystery of the Nine

Department 42: The Mystery of the Nine is a hidden object adventure game from Frogwares, creator of Sherlock Holmes: The Awakened and Secret Missions: Mata Hari and the Kaiser's Submarines. Take the role of an agent working for Department 42, a secret organization that investigates paranormal events. Yes, kind of like X-Files! Nine malevolent artifacts that were sealed away in Grimstone mansion have gone missing, and it's your job to find them before their evil influence spreads chaos around the world. 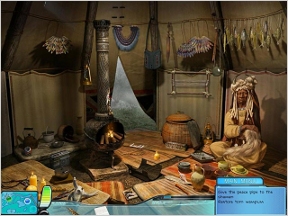 The core of Department 42 is a straight-up hidden object game with a number of adventure-style puzzles and mini-games lining its perimeter. You'll spend most of your time looking at lists of objects and scanning the scenery for cleverly hidden items. Occasionally one of these items will make its home in a menu bar at the bottom of the screen. This inventory comes into play during special puzzle scenes where your goal is to complete a few objectives by manipulating objects on the screen. Lighting an oil lamp, for example, could require finding items as well as using bits from your inventory.

In an always-welcome break from convention, the mini-games in Department 42 are more than just cheap clones of every puzzle game you've ever played. Instead, nearly two dozen diversions are woven right into the game. And you know what? They're really, really good! Without giving much of the story away, the first game you'll play involves deciphering a set of runes using an unlabeled key. All puzzles, mini-games and scenes are accessible from the main menu after completion, so you can go back and replay them at any time. 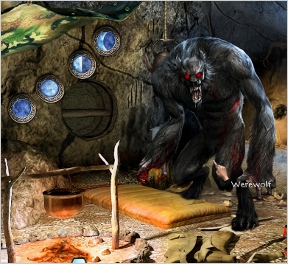 Analysis: Frogwares studio, the developer of Department 42: The Mystery of the Nine, is well-known for high-quality games with breathtaking scenery, good (if sometimes predictable) puzzle design, and the occasional awkward piece of dialogue. That's exactly what Department 42 delivers, with all the implied (cute) quirks intact. The visuals are intimately detailed from the backdrops to the items themselves. Sometimes you'll swear you're looking at a photograph. In particular the lighting effects are well-done, and Frogwares wasn't afraid to show this off whenever possible.

One annoyance makes itself immediately apparent in Department 42: click detection. In the beginning of a hidden object scene, I have the habit of clicking a few random items before looking at the list, just to see if I can clear a few things out of luck. I was surprisingly unsuccessful in Department 42, but after examining the list I noted several items I had already found and clicked. As it turns out, sometimes you have to click just the right cluster of pixels to collect an item, a mechanic that, I suppose, doesn't affect the basic gameplay all that much, though it's a disappointing oversight on the developer's behalf that stands out because the rest of the game is so highly-polished.

Department 42: The Mystery of the Nine is a great game no matter which angle you view it from. With beautiful locations to scrutinize, mini-games that almost overshadow the game itself, and excellent puzzle-themed scenes, there's no shortage of goodness to be found.

Department 42: <br />The Mystery of the Nine Walkthrough now available!

Department 42: The Mystery of the Nine Walkthrough

Department 42: The Mystery of the Nine Walkthrough

could someone please tell me how to unlock the mirror panel to get to the lab?

yes, i'd also appreciate any help with the mirror panel

If you are talking about the mirror behind the bar, have you checked out the walkthrough? Section 1. Fang of the Packleader, the second bar section has instructions on how to reveal the secret lab.

Can someone tell me if i'm missing something. I can't get the amulet attached to the Bear totem on level two.

I cannto get the amulet fpr the bear totem to attach - any suggestions?