It's not every day you get to see a nearly-forgotten ten year old puzzle game return from the dusty video game archives! The puzzle game Denki Blocks was originally released on Game Boy Color and Game Boy Advance back in 2001. Other ports followed soon after (see Jelly Blocks for a nice, similar browser experience), but it wasn't until the digital download ecosystems of the mobile scene really got going that it resurfaced to stay. Now, with both regular and HD versions on most of the major app stores, Denki Blocks is here to stay, complete with over 100 levels of delightfully difficult puzzles to solve! 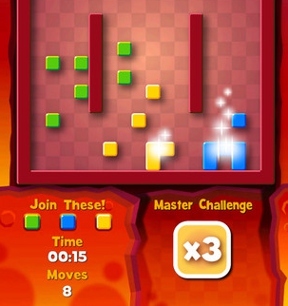 The idea behind Denki Blocks! is to slide groups of blocks around the screen and join like colors together. Everything moves in unison, so when you swipe the screen right, all of the blocks move right one space. By using corners and walls, you can prevent certain blocks from moving while the rest float free, allowing you to form shapes and eventually pass the level. Once blocks join, they're together forever, so you really have to think several moves ahead so you don't maneuver yourself into an impossible situation. Each stage also features a master challenge you can strive for, presenting extra-difficult goals like completing the level using a set number of moves, within a certain time limit, or by forming a specific shape with the blocks on the screen.

Denki Blocks is one of those unforgivingly difficult games that refuses to hold your hand or make things easier for you. A few controls at the top of the screen allow you to reset the level or undo a move, but beyond that, it's just you and your brain versus this game's impressive stock of puzzles. Easily one of the simplest but most complete games you can grab for any mobile device!

Note: The Daily Workout version below includes only a few puzzles, while the HD and XHD versions for different platforms include improved visuals for higher resolution devices.

The website linked in the photo is now a make-up tip site.