A rather adorable little king has four adorable little daughters who'd like couple adorable little trinkets: some perfume, a coat, a necklace, and a flower. What kind of flower? A demonic one, presumably. So begins our adorable king's adorable military campaign to bring adorable justice to all the thieving goblins, boars, and golems who stole the trinkets, one adorable battle at a time. The latest offering from the always-reliable Deqaf Studio, Demonic Flower is sort of a tower defense game but without the tower. You plant your upgradeable soldiers at fixed points on the battlefield and watch them chop down wave after wave of incoming baddies. The enemies' paths aren't always easy to predict so you'll have to do your best to keep all areas covered. You have limited cash and a few bombs and special units you can deploy during combat, but they take time to recharge before you can use them again, so be wise and plan ahead. It's almost as if there's an element ofstrategy to this game. Go figure. 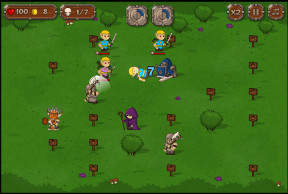 As with their recent Dangerous Adventure, Deqaf displays real craftsmanship as game makers, seamlessly blending RPG-style skill progression with more typical tower defense fare. They're never afraid to try something new, though it must be said the challenge is a bit slower coming this time around. Once you've escaped the green lands and made your way into the desert things start to pick up, and easy or not, it's always satisfying watching your tiny army swing their tiny swords at hordes of encroaching assailants. You have two main types of units, axe-wielding soldiers and spell-casting mages, each of which can transform into more powerful forms in between waves of enemies (for a price, of course). You also have a spy unit that can be placed for a limited amount of time on the field, as well as one-use bombs for emergencies. The enemies steadily increase in size and strength so you best keep your wits about you as you push further into the badlands to the east in search of tiny, adorable treasure.

decent game but wish the spawns weren't so RNG dependant. Had like 2 waves straight where I had to focus all my money and power to just not die along the bottem, then with like 30 gold in my pocket, I had to deal with a golem along the top, where NO enemy's had been before it.

A slight tip/suggestion, maybe say 'what units' are appearing from what point... or even 'what units have armor'... seemed to be a crap shoot to see if the warriors were worth buying because they did half damage to everything.

Pretty fun. I enjoyed this. Except for the fact that after earning 5 crowns on every stage, I still don't have enough to upgrade all the skills. Especially since I didn't need them all to finish the game (i.e. obtain the 4 items), I continued to play until I earned 5 crowns on every stage only to find that can't make the last upgrade.