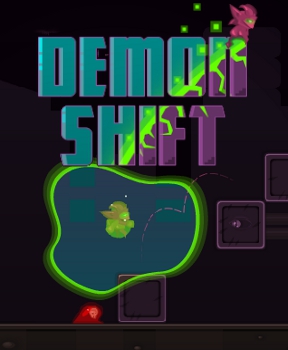 No matter who you are, there's always somebody bigger and badder than you. This is especially true if you're a chubby fuschia demon, and when one such specimen trips and shatters an urn full of souls, he's got to track all the wayward spirits down before his superiors give him one heck of a punishment. In Robot Cake's action puzzle platformer Demon Shift, you may technically be playing one of the bad guys, but that's no reason for you to not be good at what you do. And what you do is wall-climb, jump, flip, and otherwise put acrobats to shame as you try to snag the little green soul hiding in each level. Use the [WASD] or [arrow] keys to move, and, most importantly, hit the [spacebar] to shift dimensions, which can allow you to get past seemingly impassable hazards and blockades by warping your environment. Just make sure to avoid any red objects, since touching one will make you explode into a bunch of demon chunks and force you to restart the level.

For a game about gathering up helpless souls for who-knows-what infernal purpose (hey, maybe it's just a really, really expensive nightlight), Demon Shift sure is pretty. The visuals are gorgeous and vibrant, and pack both its star and their environments with character. And speaking of the environments, Demon Shift takes the short-and-sweet approach to its stages by emphasising speed for medals, and as such manages to strike a balance between relatively straight-forward puzzling and some reflexive platforming action. When it works, it works, but the game's increasing difficulty and emphasis on platforming challenge means players who just want to enjoy some light puzzling might find themselves hitting a wall, and platformer fans might find that on some stages the jumping doesn't quite feel as fluid as you need to. (Though I guess you are a remarkably fat and squat little demon, which doesn't really make for aerodynamics.) As it stands, however, flaws aside Demon Shift is a beautiful little piece of puzzling action that speaks a lot about the talent of its team, and we can't wait to see more from them in the future.

The main mechanic is eerily similar to the one seen in Project Giana...

The little demon reminds me of the devil in the Reincarny games. With that in mind the jumping mechanic was positively eeeeevil. Sometimes it wouldn't double jump at all, sometime it would without me pressing anything. And I found that sticking to the walls became more of a hindrance than a help. But none of the issues with the physics stopped me from completing all the levels and getting a gold medal in each one, so I don't want to discourage anyone from playing a fun game. I had to giggle at the very end seeing what Satan was doing with the souls.

PS. Does anyone know how to get the last achievement? The one that says;

If it is the one I think just log back into the game!

Hmmm... I did that and even replayed the first 2 level sets. Maybe I got a bug or something. No biggie, thanks anyways!

I'll post this in a spoiler, but I think there is a "cheat" to the game (maybe it isn't, but it's the only way I've been able to finish a level without using the warp thing).

If you die and spam "up" from the moment you died till the moment you respawn, you can "fly". That is, if you continue pressing up frequently after you've caused the "bug" to happen, you can simulate flying.

If you touch the ground, you lose the bug and have to die again to re-enable it.

A cute little game, not too difficult but the medal adds a nice incentive for the completionist. Though some of the gold medals seem ridiculously easy to get.

The only thing I'd change is the pause that happens when you switch worlds; that makes the timing on the platforming tricky at times, and means you never get that fluid-feeling perfect run in (except on the levels where no switching is necessary).

Otherwise I thought the mechanics were solid and the difficulty was great for a casual game. I'd love to see a sequel.

at least here, at least now, on a mac, the controls for this game are so tight it deserves ten million extra tons of kudos & commendations.

it's a great little game elsewise but i did wanna give a shout out to just how well the commands work. no doing stuff for no reason, no slipping, no supposed to be doing something but somehow, instead, doing something else. just a well made game.