If Beret Applications' Demon Chic were a person it would be a Brooklyn-dwelling record store clerk riding a fixie to a farmer's market while listening to Yo La Tengo. It would be of the species Homo ironicus—in other words, the creature popular culture has dubbed the hipster. Yet, astonishingly, the game is neither as insufferable nor pretentious as this analogy would suggest. Instead this mobile piece of art instead is an entirely successful marriage of action RPG gameplay with an absurd, darkly funny, and frequently touching story. 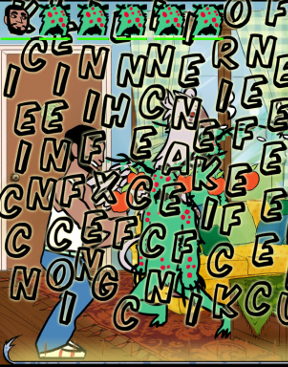 Gary and his boyfriend Ashok are forced to take in Ashok's brother Devraj as a roommate after Devraj finishes college and can't find a job. The game's allusive and frequently tangential narrative follows the trio as they battle the demons induced by schizophrenia and drug abuse in both figurative and literal forms. Battles are conducted by dragging floating letters to the bottom of the screen to form words that deal damage. You start with FIRE and ICE but as the game progresses offensive and defensive buffs are added, and enemy weakness make the psychotic plants and disembodied heads that much easier to defeat. You can select skill improvements every few battles, but overall the roleplaying aspect is downplayed in order to allow the player to focus on the aesthetics and narrative.

Analysis: Like the guy that spends an hour every day perfecting his bed head, Demon Chic's shambolic exterior belies the effort that it took to produce. The dialogue tossed back and forth among the three central characters deal with race, sexuality, mental illness, and other topics you wouldn't expect to see in an RPG based around pulverizing demons. It's a testament to the realistic quality of the dialogue and situations that we wondered if the three main characters were based directly upon real-life counterparts. Coming as it is from three young friends, Demon Chic's dialogue is heavy with references to sex and drug use, yet these are incorporated naturalistically; it never feels as if the writer is out to shock. This is the rare game in which the label of mature content does not mask embarrassingly juvenile presentation or sensationalist posturing. 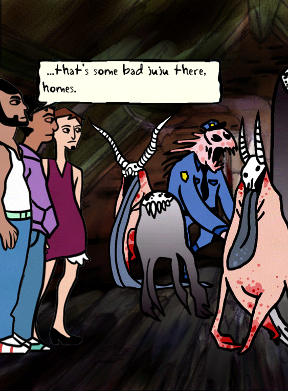 Demon Chic is a message game, certainly, but its offhanded nature works in its favor to soften the capital-I Importance of its underlying themes. It's perfectly possible to just enjoy Demon Chic purely as the idiosyncratically gorgeous work of New Media art that it is, but it's also impossible to step away from the game without subsequently pausing to reflect briefly on what you have just witnessed. It is remarkably neither heavy-handed nor polemic despite referencing situations that most games never venture near.

The gameplay, interesting enough but rudimentary, is completely overshadowed by the stunning audiovisual display. Each screen is a legitimate work of art, with endearingly cartoonish and sketchy backgrounds interspersed with surreal watercolor illustrations. You will want to progress the story just to see what absurdist delights wait around the next corner. The soundtrack is as equally high quality, with tracks coming from psychedelic rock vets Queen Elephantine. Imagine a band led by Jim Morrison's stoner metal cousin and you're halfway there.

We initially expected this unusual presentation to become grating, but thankfully it never does. The narrative is inventively spry and changes direction and form frequently, switching between slice-of-life vignettes and hallucinatory side stories in a way that keeps the flow pacy. As soon as you tire of one section, a fresh change in perspective appears. 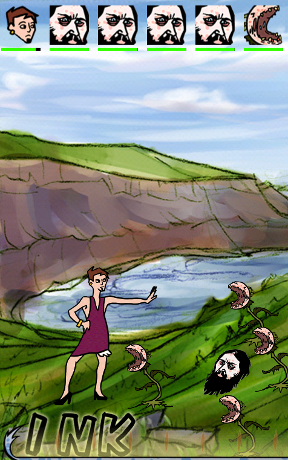 It can't be emphasized enough: Demon Chic is a visual narrative in which gameplay elements are only a minor presence in an overall experience. Those expecting deep roleplaying mechanics will be disappointed. Yet although the gameplay is basic it is not extraneous—art and game are tied together. The art could not exist without the game, and vice versa. By the inclusion of this participatory element the metaphoric impact of the narrative is increased, and a product is created that presents an kind of experience unable to be duplicated by other forms of narrative.

The late Roger Ebert famously questioned the ability of the video game to ponder great questions about the human condition without becoming a mere ghost of existing text based forms. A uniquely involving and often wryly funny meditation on human tolerance and difference, this game answers the question implicit in Ebert's statement: what can a video game say that other forms of art cannot? A landmark in app design and an indication of the medium's emerging maturity, Demon Chic deserves to be experienced by every iPad owner with an open mind.

I don't know what game you played, but the Demon Chic I bought was really really really a lot less fun to play than your review suggests.

This is a game that is original in its hipster cheeky concept but so lackadaisical in its execution that it is just a bore to play. The dialogue is really just about three idiots goofing off, the environments are sketchy and repetitive, the story seems trite and I'm not at all drawn to it.

But what's worst is the gameplay. Man is that boring. I am all for artistic experiment, but right now I just want my money back.

Just finished this - I really enjoyed it. The soundtrack is phenomenal, I've not come across queen elephantine before and any game that introduces me to a new band is immediately in my good books. The gameplay wasn't crazy exciting, but every other aspect was so rich I really didn't mind.