There probably aren't a lot of video game characters who deserve a vacation more than Emily, the non-stop restaurant managing dynamo of Gamehouse's beloved Delicious series of time management games. She and her new husband were expecting a low key honeymoon before her brother-in-law turned up with his newly acquired cruise ship and offered them the trip of a lifetime. But with Emily's entire family and circle of friends on board and her best friend forever Francois in charge of serving the ship's customers, will Emily really get a chance to relax? Delicious: Emily's Honeymoon Cruise is yet another gorgeous, funny, smart and lovingly polished gem that will delight fans and woo newcomers.

For the most part, Delicious: Emily's Honeymoon Cruise plays the same as the rest of the series. Each day, you need to serve all the customers before they get upset and leave, reaching your target goals in cash for the day. Customers will tell you what they want, and then you simply have to click on each item to bring it to them, though some things like drinks or ice cream have more than one component. Emily and Patrick are special customers, and each day you'll need to send them to do several different things in order to fill up your heart meter. If you can handle all that not only do some ingredients need to be refilled, such as by chopping more limes for drinks, but there are tables to be cleared, mice to be driven out, and the odd special objective you'll need to accomplish in addition to your usual duties. Of course, Francois isn't the only person on board with new duties, and you won't be slinging cocktails and magazines the entire time. Honeymoon Cruise feels like an immediate step up in difficulty and complexity from the others, throwing multi-step items and large amounts of customers at you very early on. It can be a little overwhelming, especially if this is your first time-management game, but once you get used to where everything is and develop a rhythm things begin to move much more smoothly. Making Emily and Patrick happy in addition to serving all your other customers isn't as hard as you may think, especially if you make it a point to deal with them early on and don't hesitate to send them from task to task until their hearts are full. 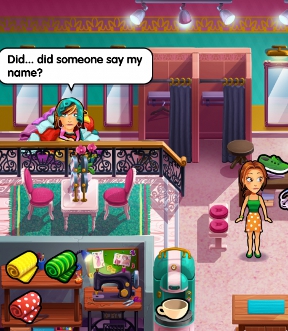 The Delicious games are one of those series you sort of wish every other casual franchise would take a cue from.They are, without fail, some of the very best casual games around regardless of genre, and know exactly how to make a player feel like they've gotten their value out of a game. While the formula never changes much, there's always just enough minor tweaks and differences to keep each game fresh, and the well-written storylines and endearing cast of characters doesn't hurt either. The story here is every bit as light-hearted as you'd expect, following Emily and her friends as they deal with trying to juggle their new jobs and cope with problems silly and serious, like Francois' ridiculous rivalry with the maid's little boy, or Angela trying to impress a legendary fashion designer. The storyline regarding Emily's dodging a particular topic Patrick wants to talk about and her own feelings on the matter feels more than a little like manufactured drama, since I'm pretty sure something that big you'd discuss before you got married, not to mention the news about Patrick's (awful) mother is sort of horrible and handled in a sorta offhand way, but needs must, I suppose. Despite those bumps in tone, however, the game is just as addictive and compelling as the rest of the series, which is no small task consider it's a whopping nine games long. Delicious: Emily's Honeymoon Cruise packs in an amazing amount of variety without losing the formula fans love, and doesn't skimp on any single aspect from art to story and soundtrack. This is how casual time-management games should be made, and it's highly recommended.

4,730 Views
3 Comments
chrpa— Jayisgames needs your help to continue providing quality content. Click for details In the grey stone room you find yourself in at the beginning of the game, you'd expect ghosts and ghouls... but the opposite is true. After solving...  ...

2,283 Views
3 Comments
chrpa— Jayisgames needs your help to continue providing quality content. Click for details Hi everybody, the Halloween Special is out! Amajeto didn't disappoint us and delivered Halloween escape on time - one-scene game only, but nice. Then we've got short...  ...

1,801 Views
0 Comments
chrpa— Jayisgames needs your help to continue providing quality content. Click for details Welcome to Mobile Monday! This week's games are all halloweenish but the games are not scary at all, the theme is all in the decorations and colours....  ...

Views
0 Comments
jayisgames.com— It's scary how we undermine the gaming industry when it is the wealthiest niche out of all other industries. You can make millions from gaming and selling a newly developed game. Developing a game takes immense skill because people around...  ...