Zai awakes in a dark room and has no memory of anything. As he starts to explore his surroundings he finds out a little more about himself, and soon decides he wants all of his memories back. Zai is very calm about things, even if he's in an abandoned lab that just reeks of creepiness, in this story-driven free indie science fiction adventure game by Jestereir, DELETE? Zai isn't alone, as early on he runs into a girl named simply 04. It may seem nice to have some company in such a eerie place, but she seems determined to follow him around, watching his every move... almost uncomfortably so. And you can't but help to feel like 04 knows a lot more than she is leading him to believe. Still, she'll occasionally speak up to help you with the puzzles or let you know what's allowed and what's not. There is something definitely off here, but it's your choice if you want to explore to find the whole truth or just find a way to restore your memories. With four different endings you have a lot of ways to chose Zai's fate. 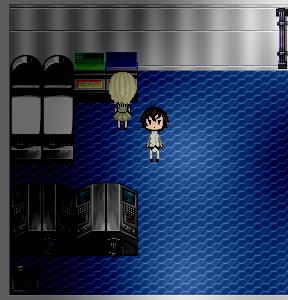 DELETE? plays using the [arrow] keys to move, [spacebar] to interact with objects, and [ESC] to access your inventory, though in reality there are only one or two items you need to explore by using this method. All other items you can use will be used automatically when you need them. Not all the items glow on screen either, so you'll need to do some exploring but Jestereir makes this enjoyable by filling the world with descriptions. If there is a pile of papers on a desk, you can bet there is something to say about them, whether it's important to the story or not. Hints are also hidden in such descriptions, so you'll need to be ready to do some reading. This doesn't weigh the game down, but instead helps pull you into this world... a world that you may need to do some re-exploring in, as there are a few times where looking at something again brings new information, or helps Zai spot something he missed his first go around, and - this is very important - when searching for different endings.

DELETE? is a self describe horror-esque game. While, yes, things are creepy and there is a foreboding sense of doom and creepiness, there isn't really anything that will cause even the most weakhearted to cry out in fright. Instead, the game is rather dark in tone. Even with Zai's sweetness, and the soft, beautiful music, there is a heavy feeling in the air, and if explored to the fullest there are some shocking things to discover. The four endings are labeled 'bad', 'good', 'false', and 'true', but I don't think those labels really fit considering the themes they share, or even depending on how you look at them. Long rant cut shorter, this is not a game that's going to make you want to go sprinting freely in a field of daises afterwards. But just because it's on the grimmer side of life doesn't mean it's a game to just pass on. With the beautiful music and great artwork, this is a not only a well told story but a beautiful tale of two lost souls. Just remember to stick around through the credits... there is always a little something extra.


Not available.
Try Boot Camp or Parallels or CrossOver Games.

I'm stuck near the end. I've found two ways to die and read the contents of the USB drive, but can't figure out the "lighted numbers".

the code for 'lighted numbers' is 25

I brute forced the "lighted numbers" code and got the "good" and "fake" endings. I don't really care enough to try to get the other endings.

The official walkthrough (linked on the download page) has a few spots where it's frustratingly vague or downright wrong, all relating to the True/Fake ending paths.

Where it says that the doorknob is in the middle cupboard, it's actually in the rightmost cupboard.

At the very end of the walkthrough, where it says to select "no," select "yes." Selecting "no" will just get you the "good" ending again.

On top of that, the game became terribly slow and jerky in every room where the lights were on. This seems to be a problem with the way RPG Maker handles layered graphics. The developers probably used RPG Maker because they are comfortable with it, but I think this game could have been much smoother and less frustrating if it had been built in an adventure game engine, like AGS or Wintermute.

With regards to the walkthrough errors:
[spoiler]Technically "the room key" does open mother's room, there's just two different room key's :P They're called the same thing, but are different items.[/spoiler]

What is his name in nummber puzzle?

Beautiful game. Heartrending for someone like me who loves robots.

For the "chase scene" with the robot guards:

After getting the item, run just out of the red area and immediately go up and run out from there. Attempting to get maneuver any other way results in death. I'm putting this here because neither of the walkthroughs tell you how to do it and I must've tried for half an hour before I figured it out. It was awful.

Did anyone actually figure out what the hell "lighted numbers" was supposed to mean? I've counted those miserable little lights five times in different ways and not once have I gotten the answer posted here.

Yeah, the "lighted numbers" was annoying. It turns out that some of the computers can turn on, so you have to go through each dark spot individually and check them. The ones that turn on will make the numbers.

Also, the names for the endings can unlock the extras. Good End is All Thrown Away, Bad End is Protector, Fake End is Protected, and True End is Deleted. Using the instructions in the readme, you get... alprprde2619. It's nonsense, but it works.