Sometimes you just need to get some time away from it all, and this soothing crafting role-playing game by Chibig is just the thing. One part Harvest Moon, one part The Little Prince, Deiland features a young prince who is the sole inhabitant of Deiland the Tiny, smallest of the outlying minor planets. Fortunately the land is great for mining, farming and lumber, enabling you to craft tools and buildings and upgrade them with improvements, cook, catch fish, learn recipes and craft them either for yourself or for the traders who occasionally stop by from time to time. Mun is a brave hunter of bugs who will often have just the right items you need, Lock is a kindly old man with plenty of potions and mixtures and an interest in any herbs or produce you happen to have, and Brram is an interstellar chef who buys and sells culinary masterpieces. While slightly briefer than most games in the genre, with its tranquil music and positive attitude Deiland is uncomplicated and interesting enough for young people while involved enough to keep adults interested. There's always something to do, and it's also just the thing for keeping the hands and eyes busy if you're the type to listen to lectures, radio plays or audiobooks in the background. When you do finish Deiland in about a week, be sure to check out its free sequel Ankora for Android and iOS, which is more advanced and features Mun the huntress crash landed on a much larger farmable planet. 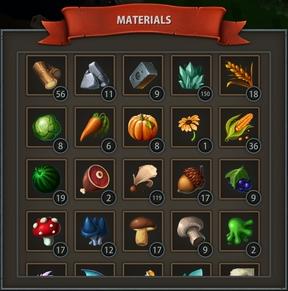 Deiland comes with a brief and helpful tutorial, but doing tasks in it is pretty easy once you master the concept of selecting the right tool for what you want to do and then tapping your intended destination. While there are plenty of activities and the tasks are freeform, there are also 'Wishes' that show up as objectives, which earn you Crystals and can also make new buildings available. There are also plenty of random world events such as visitors landing, benevolent light sprinklings of rain for your wells and gardens, asteroids which will bring mineable Crystal asteroids and potentially rare and exotic plant seeds, but will also wipe out your crop if it happens to land in your field, as well as the occasional alien invasion. Yep, you heard me right. Every so often aliens will show up intent on doing you in, and you won't be able to tend to your fields or anything especially worthwhile until you get rid of them. Getting rid of them involves showing them your axe vigorously and repeatedly (you'll probably want to make upgrading that a priority), or you can banish them at a distance with an actual Wand which uses those mineable Crystals I'd mentioned. Upgrading your Wand not only makes it more potent, but enables more interesting spells as well. Success will build your experience points, and each time you level you can pick a stat to improve. If you're unsuccessful, the penalty is pretty mild: The game will revive you at home sans a few of the choicer items in your inventory, and you'll find that the remaining aliens have all gone for some reason. But we've saved the best for last: Deiland not only has delightfully chibi graphics, music that's great for hours of cozy solitude and an innocent, nostalgic feel, it also features an innovative mechanic that enables you to rotate the planetoid around by sliding your finger around on the screen. Don't be surprised if you find yourself idly moving the planet around, just admiring the results of your craftsmanship and appreciating the scenery in your own tiny private utopia.

A beautiful, charming little game. Lucky for me, I was snowed in for two days, so I had plenty of time to spend on my private planet.

A few tips:
If the game crashes, try clearing your phones cache (On iphone hold the start and home buttons at the same time till the screen restarts)

If you close the game (or it crashes) while there are enemies present, you automatically lose and the bad guys steal three high quality items.

Health doesn't regenerate over time. You can eat or stand next to a campfire to regain heath. Upgrade the campfire or build two fire pits next to each other to speed up healing.

You can't catch the chicken (or is a kiwi?), but maybe there is another way to cook it?

You don't need to spend any money to enjoy or win the game, but consider buying the sword recipe or a resource pack as a way of thanking the developer for making such a beautiful free game.

This game made my 2-week-old Android phone almost stop working after a few days. Keyboard would barely accept input, video would no longer play at all, and everything lagged to the point of timing or nearly timing out.

I don't know what the problem was, but I had to do a factory reset and wipe my entire phone just to get it working again. Needless to say I will never risk any device of mine on a Chibig game again.

The game is very well decorated, but at the same time it is extremely brief, you can turn the planet whatever you like, with a single touch. You can also tell your character where to go and what to do, it is mastered very fast.

The game has a very good idea, however to play is still tedious, it doesn't have enough dynamism and also events.

I thought this was a really fun game for a while. I even spent money on extra stuff at beginning. But it grew kind of repetitive after a while if they would have updated it more, I might still be playing it.but it could just be me ad I get tired of games rather quickly! Not a bad game I've played much worse.