Retro platformers and other genres seem to be in vogue these days, but the title Dear Edwin moves the goalpost a notch further. Take a step back to the height of the industrial revolution and into the life of Edwin Vayne. Once a prominent detective, he has long since retired, until one day a strange letter pops into his life. Helplessly intrigued, Edwin decides he must follow the story himself and get to the bottom of a peculiar and very complicated tale.

Dear Edwin plays mostly true to form as an interactive novel. If you're a fan of reading lots of texts and vividly fleshed out character details and development, you will certainly appreciate this aspect of the game. However, it also incorporates a bit of exploration, as at certain points you control Edwin and must wander off throughout the city looking for your next objective or clue. At points in the narrative, you'll be asked to make decisions regarding how to progress or what to do, though they ultimately do not have that much bearing on the story. 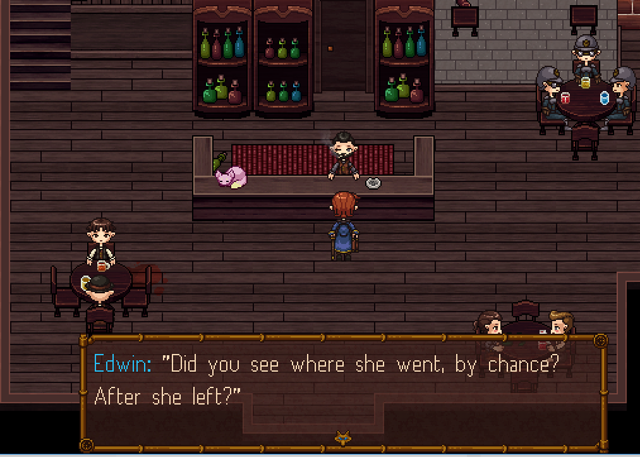 The story picks up with Edwin arriving, of course, in the miserable rain accompanied by a dreadful headache, stepping off a train. Though not acting in an official capacity, he will aim to crack the case nonetheless. "Start in the place that asks, but never answers," is the only cryptic clue from the letter directing him. Edwin heads for the Pit, the poorest section of a city whose people are largely forgotten and neglected. The father of the woman who penned him the letter, he soon learns, has died in an apparent airship accident. Or at least, that the story that someone is penning - Edwin himself is not as sure of this explanation and suspects something deeper. The state of affairs grows even more complex when he hears that the woman, Nora, is quite upset about another death, an apparent suicide from a girl taking a swan dive off her balcony. The mystery grows deeper as Edwin begins to suggest that the government is staging a special effort to clean everything up - quite an oddity given their typically nonchalant attitude for anything that occurs down in the Pits.

On the other hand, Edwin is not exactly held in the highest regard himself in these parts. In his time with the Inquisition, he helped expose some high-level corruption, whereby the local government was taking money they were not entitled to. Assuming, of course, that they were pocketing the extra, Edwin had no qualms about them being prosecuted to the fullest extent of the law. When all was uncovered and the dust settled, though, it turned out the money was being allocated to help the poor people of the slums rather than being stolen for the officials' own pocketbooks. A more noble ambition this may be than taking the money for oneself this may be, might reason the great detective Edwin Vayne, might reason, but it is still a crime, is it not? What is the issue as long as justice is served?

Much of the story evolves in this fashion, as the round peg of Edwin's staunchly analytical, theory-driven brain clashes violently with the square pegs of the world. At one point, Edwin needs to talk to the baker, who is selling bread and has a lengthy line of customers hoping to get some lower priced scraps. Annoyed that it will probably take all day for the long queue of customers to subside, Edwin proceeds with the only logical solution. He hands the baker enough money to buy his entire stock of bread, and informs the people that the bread is to be distributed evenly amongst the townsfolk and to see to it that no man, woman, or child goes hungry. But instead of heralding praise for the good deed of feeding the local populace for the day, Edwin merely considers it the fastest way to clear out the nuisance of a crowd of people in line ahead of him for a sum of money that is but a trifle to him.

Overall I thought Dear Edwin did a fantastic job in the storytelling and character development aspects, though there is still in my opinion some room for improvement elsewhere. The nature of the story is that it is mostly linear, with a few choices that change some of the dialogue a few lines in but yield no significant deviations in the main storyline. A more nonlinear format, perhaps with multiple endings or greater effects on aspects of the plot would feel more compelling. Of course, it is understandable that with more endings/story possibilities, the writing needed increases and the developers may not have had time to flesh it out fully.

The other way in which the presentation might be improved is to feature the detective work side of things more and promote some more interaction from the user in that respect. As it stands, we are mainly watching from a bird's eye view, asked to look for clues but not really tasked with putting them together. Instead, we stand in awe of Edwin's Sherlockesque ability to piece together shaking our heads a little bit wondering how he did it. If the player was asked directly to draw conclusions (perhaps potentially leading to the wrong verdict and an unpleasant outcome for dear Mr. Vayne!), it might feel more enchanting still.

To play the game, use arrow keys to maneuver the main character, and [Space] to proceed through dialogue (there's quite a bit in the beginning). You can also walk up to someone and press space to begin a conversation with them. At a couple of points in the story, you'll be presented with a quick-time event and need to press a number of keys as directed within a certain amount of time (a sequence of arrow keys and others). Other than that is it rather straightforward, so grab a cuppa tea and enjoy the thrill as mastermind Edwin Vayne gets to work.