Contrary to what the title suggests, Noname Lab's Deadly Road Trip isn't a game about a bunch of teenagers getting gruesomely murdered on a forgotten country road in Arizona. Instead, it's an arcade shooter about a bounty hunter/biker chasing down a seemingly infinite group of criminals. All you have to do is direct him with your mouse and click to shoo... or choose the autofire option. Your guy drives along a road, killing as many thugs as possible and collecting money and power-ups, until he runs out of fuel or gets totaled. At the end of each run, it's upgrade time. If that's not enough, there are also twenty-five missions to accomplish. The first impression you get from Deadly Road Trip is just how great it looks. Driving around at sunset on the beautifully rendered road, your bullets sparkling like fireflies, criminals blasted through the air in a perfect explosion... and all this is supported by flawless mechanics. But it's not exactly a walk in the park. 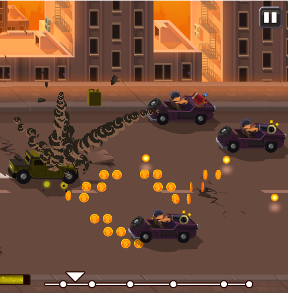 At the beginning, you'll get a pretty lame motorbike with a gas tank the size of a lunch box and the endurance of a tricycle. Soon enough, though, you'll be able to upgrade it to something more reliable and the game will hit its stride. When you kill enemies, you'll be able to pick up more fuel and better weapons. The road is strewn with money and a wide range of power-ups, from nitro to rockets, making your runs more dynamic and certainly a lot more fun. Another interesting addition is the ability to jump from your vehicle to those of your enemies, which is a great way to continue a run if you're getting low on hit points. Deadly Road Trip is by no means short, and it's not meant to be beaten in one sitting. Having to restart from the same point every time does get repetitive after a while, but, somehow, that's the beauty of it – you'll have your fill, leave it for a while, then come back and start again with new missions and a determination to get even farther this time. Because sometimes you just want an explosion-filled, unlimited-ammo old school arcade game, and Deadly Road Trip is just that.

Too much dust-cloud after each explosion.

I thought this game was way too grindy - it took me a long time just to get to the first tunnel.

Biggest problem is too many thing look alike. The challenge shouldnt be in not seeing the mines, but in finding ways to avoid them. It is bad gui/graphical game design.

There are plenty of colors to allow for distinguishing all items. Graphical designer needs to be more creative!

Flash crashed, and I lost all my progress. :(