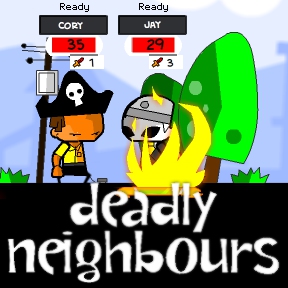 Everyone's had problems with their neighbors at some point. From the party guys who blare music at 3 a.m. on a Monday morning to the lawn dictators who go berserk if your grass gets too long, bad neighbors are a fact of life. In Nerdook's latest strategy game, Deadly Neighbours, you get to deal with your neighbors in the most direct way possible: by beaning them in the head with a PS2 controller! Or a fishbowl. Or maybe you'll just take a good old-fashioned butcher knife to the face. You've got $25,000 of debt to make up, and you're going to take it out of the hides of your neighbors.

To clear each stage, your family of three will need to defeat the opposing family of three using throwing, shooting, and melee weapons. The game is largely mouse-controlled, with camera movements tied to the [left] and [right] arrow keys. Click on a family member to select them, then click on a weapon to prepare it. Melee weapons activate if a family member touches an enemy, shooting weapons activate if they're equipped and the family member is idle, and throwing weapons must be aimed and thrown manually with another click. Each weapon costs a certain number of Action Points to use and you gain some AP per turn, so you'll need to prioritize what to use and when.

There's a vast amount of weapons available, from Ming vases to fishbowls. Each has different properties and the throwable weapons are affected by gravity in different ways. You can also use weapons that set the ground on fire, make it slippery or leave toxic puddles that adversely affect enemy family members. Properly arming your family is a big part of the game...though it's hard to resist using less-powerful weapons like the rolled-up newspaper for the sheer comedy value

After every level, you'll also get to go on a mouse-controlled Deadly Drive to run over your neighbors and collect even more cash. This is a nice action-based break from the ongoing neighborhood battles. As you earn money you'll also obtain perks to further improve your characters; you can give them boosted health, more powerful melee attacks or cause them to gain health from toxic puddles amongst other options.

Despite the gruesome premise, the graphics are fairly tame cartoon fare. Defeated characters fall and vanish in full-body casts, even when run over by the van. Everything is colorful and it's generally easy to tell what's going on, though things can become pretty chaotic. 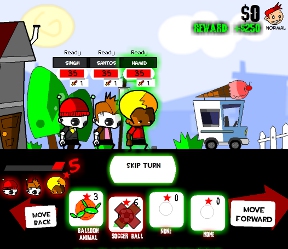 Analysis: The most noteworthy part of Deadly Neighbours is the immense amount of customization available. You can customize your characters' faces, hair and clothing, the weapons they use and the perks they earn as you hit money milestones. There's a ton of different options and you keep unlocking more as you play. When you've got a family you're especially fond of you can share it with other players. Fans of personalization will love this game.

You'll need a balanced arsenal of weapons and perks to counter opposing families. For instance, melee weapons do a lot of damage but are easy to stop with ranged weapons, but perks are available to let melee characters continue charging after being shot or beaned with a ranged weapon. There are also status effects and terrain effects to worry about. There's quite a bit of depth here for strategy fans.

In the end, though, all this depth does boil down to throwing your best weapons and characters at the other team in the right order until someone dies. While the customization and perks spice this up to a degree, if you don't enjoy the first few battles then chances are you're not going to enjoy the rest of the game. A little more diversity of gameplay would've been nice.

Regardless, this is a polished, fun game that certainly merits a look. It's hard to find a game that lets you personalize your experience more than Deadly Neighbors; creating and sharing new families is almost a game in and of itself! So get a family together, grab the nearest Ming vase and take to the battlefield, because if you don't, your neighbors just might.

If you want to play multiplayer, you will have to play at Kongregate.

This keeps getting good, thanks JIG :)
By the way who won you or Jay (in the games screenshot).

I'm not telling who won, but I WILL say that this is the first job I've had where you're allowed to set your boss on fire.

This game seems pretty cool. I've got a family of an investigator robot, David Caruso, and one of those British Castle Guards. All the other families will... B) Fall apart. YEEEEEEAAAAAAAAAAAAHHHHHHH!!!!

Im cool with that Cory, and what a great job it is.

You know, you should have said that multiplayer and stuff only works on Kongregate. D:

[Thanks for pointing that out. I added a note about that to the bottom of the review. -Jay]

thanks for the review, cory, glad you enjoyed the game!

I could see how this COULD be a fun game...but the gameplay felt a bit too awkward and jarring to be fun to me. I wish I could set multiple attacks and actions per turn, if I have more action points left.

I managed to beat the game extremely easily by stacking all the defensive perks (+ 10 HP, + 15 HP and double charge distance, -%50 melee damage taken), giving them a chainsaw, and tearing everything up. I even

killed the blonde guy you see on the bottom of the screen at the end.

haha, i just gave all my guys trail blazer and the back two pyromaniac. the whole place was on fire the entire time.